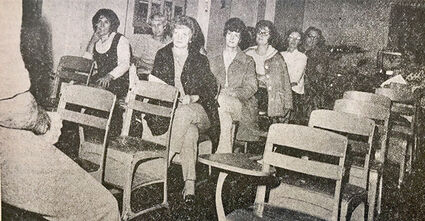 Waitsburg-Prescott’s first-string defense held Mabton to minus 31 yards of rushing and minus 3 yards passing, en route to a 54-8 homecoming drubbing of the visiting Vikings here Friday. Mabton recorded no first downs versus WP’s no. 1 defense, fumbled twice and ran only four plays for positive yardage. WP’s starters played just half the game, and their dominant performance on both offense and defense forced the 40-point running clock rule for the entire second half. WP’s initial scoring came early and often. The Cards put 26 points on the board in less than 5:30 in the first quarter.

The 1997 Cardinal volleyball season ended on a high note as the Waitsburg Cardinals defeated Liberty Christian in Richland in the last game of the regular season. Waitsburg smothered LC 15-0, 15-2. The Cards, 9-5 in league and 14-6 overall, are preparing for the Blue Mountain League tournament this Saturday in Asotin. Waitsburg will face the powerful Pomeroy Pirates at noon in Asotin. The number 3 Cardinals play No. 2 Pomeroy, which was unseated form its season-long position in first place. Liberty Christian, a program finishing its first season, was no match for the Cards. The Kennewick team faced all 11 of the Cardinal varsity, some of which played only a single game, said Coach Karen Huwe. The match was over in 30 minutes.

[Photo Caption] Eight ladies from Waitsburg and two from Prescott have been attending the WWCC class for football for women conducted by the Warrior coaching staff. After several weeks of study, these gals now know the difference between a forward pass and a first down, so the men better be careful discussing football around them. In this WWCC photo are, left to right, Jan DeCoria, Patty McKinney, Betty Callahan, Betty Maib, Mary Davis, Betty Jo Donnelly, Carol Huwe and Janet Westendahl of Prescott. Coach Mike Monahan is at the left of the picture.

William Anderson of Waitsburg is one of a group of Whitman students to be pledged to the Whitman College Dramatic Club for evidence of ability in acting, playwriting and stage production.

Mr. and Mrs. Willis Kinder who have been making their home at Hanna, Alberta, have returned to Dayton and expect to settle permanently in this part of the country.

Mildred Gassaway, daughter of James Gassaway, who has been confined to her home for some time with a bad case of measles has retuned to school.

Mrs. S. W. Smith and Mrs. J. C. Neace entertained thirty lady friends at the home of Mrs. Smith on Wednesday afternoon at one of the most delightful “at homes” of the season in the city. Mrs. Russell and daughter of Los Angeles were the guests of honor. Dainty and toothsome refreshments were served.

Robert Loundagin was unfortunate in that he had 1400 bushels of wheat damaged to an unmarketable extent by getting wet and sprouting.

Jack Smith arrived in this city on Saturday morning from Pendleton. Jack has just completed the brick work of the Odd Fellow’s Temple there, a beautiful structure of two stories, 50 x 92.