Waitsburg siren will be tested Oct. 21

A test of the emergency use for flood, fire, or other disasters will sound at 10am 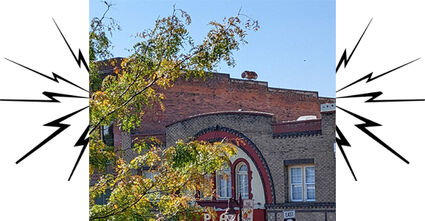 The siren can be seen on top of the Weller Public Library, small but mighty.

the siren was not tested at noon, it was tested at 10am on Friday, October 21. It was tested in its capacity as a fire, flood, or disaster alarm system. It was sounded in an undulating wave of sound, peaking at its loudest for six seconds, lowered for six seconds and repeated. The noon siren or whistle was not tested but will eventually be sounded at noon on Monday through Friday for 10 seconds.

WAITSBURG-Last spring, after a resident asked council members at a regular Waitsburg City council meeting about the possibility of bringing back the noon siren, the Waitsburg Commercial Club ran a survey. The conclusion showed most respondents supported the return of the noon siren and some emergency applications.

The noon siren was deactivated by Columbia County Dispatch when former emergency services manager Ashley Strickland was at the helm. The activation of the siren for emergencies was deemed unnecessary at the time as emergency workers no longer relied on the technology. The noon sounding was administered manually from the emergency services office in Dayton.

However, the siren at noon is felt by many as a charming tradition. It reminded those who heard it of the need to let farmworkers in the field and the mill know it was lunchtime.

The siren, located on the roof of the Weller Public Library, is typical of world war ll air raid sirens; it is loud. It is not a whistle, though some refer to it as such. It is also not connected to the pair of speaker horns on the corner of the former Waitsburg City Hall roof. That sound system is used for parades and seasonal music.

To remind the public and let new residents know what the siren sounds like, a test run will occur at noon on Friday, October 21.

In a proposal to the Waitsburg City Council, resident Louie Gagnon and the city's Community Health and Protection Committee asked the city for access to the upstairs of the Weller Public Library, where the control box for the siren is located, to reprogram and revitalize the noon whistle.

In the proposal, the cost of parts and labor to reprogram and automate the siren would be covered by donations of up to $1,500.

The new siren could also be sounded manually at the start or end of parades down Main Street, including the Hometown Christmas and Celebration Day parades.