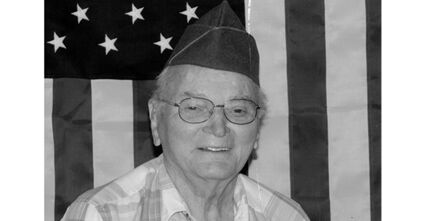 Delbert Mock passed away September 24, 2022, in Waitsburg at the age of 98. Delbert Charles Mock was born on September 3, 1924, the son of Denzil and Neoma (Gluck) Mock in Hanfo0rd. The family moved to Hanford, Washington, then Enterprise, Oregon, for a short time before settling in Waitsburg, Washington, in 1933. Delbert was drafted into the U.S. Army while a junior in high school. He attained the rank of Staff Sargent in the 169th 43rd Division. Upon returning from the war, he earned his high school diploma from Waitsburg High School in 1945. Delbert worked at Maybac's, drove truck for Dow Wright, and moved to California to work for Birdseye for five years.

He returned to Waitsburg and opened Mock's Electric, where he sold and repaired appliances until he closed the business in 1979. After that, he worked as a refrigeration mechanic for the Veterans Association Hospital until he retired in 1986.

Delbert married Bernice Cole in 1957 and raised two sons, Jerry and Tom Mock. The couple later divorced, and married Louise Lingle in 1981. Louise, who passed away in 2006, had four children, Jan, Jackie, Debbie, and Rod.

Over the years, Delbert coached Little League baseball, served as Master of the Masonic Lodge, was a member of the Waitsburg Lions Club and VFW, and was Commander of the American Legion.

In lieu of flowers, the family would like memorial contributions made to the Walla Walla Community Hospice through the Herring Groseclose Funeral Home, 315 W. Alder St., Walla Walla, WA 99362. In addition, friend and family are invited to sign the online guestbook at http://www.herringgroseclose.com.