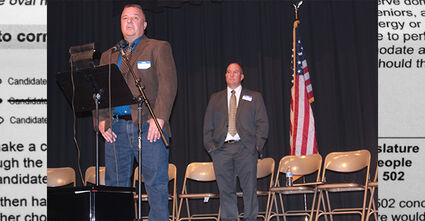 Sheriff Joe Helm looks on as Deputy Jeff Jenkins responds to a question at the AAUW Candidates Forum held Oct. 5.

Columbia County Commissioner Charles Amerein is seeking reelection to a second four-year term in District 3. His opponent, Jack Miller, is hoping to unseat him in the November election. Both men are Republicans.

Amerein said he hopes he has provided the community with efficient, effective service over the last four years.

He believes he is the best choice for the position because he values person freedoms and liberties, as well as economic prosperity for our community.

According to him, the biggest challenges facing county government lie with unfunded mandates and executive edicts from Olympia, which divert funding resources away from the county.

Amerein said he believes the county's most pressing need is for a new law and justice center, which would include a new jail. Another need is for a human resources manager. Both are in the planning stages.

The biggest challenge facing small communities, he said, has been the hollowing out of the manufacturing base, which has led to social ills like drug and alcohol abuse.

Amerein said when people have jobs and disposable income to spend, the situation on Dayton's Main Street will also improve.

"Right now, we need jobs in America. We need industry, and we need to build things again," he said.

Jack Miller has a degree in Agriculture Economics from WSU. He was raised on a diversified farm in the Yakima Valley, managed a farm for the Tribes in north Idaho for 32 years, and has lived and farmed in Dayton since 1975.

"Several people came and asked me to run for this position," he said. "I was impressed by the fact they were from across the political spectrum, one side and the other. I thought if people like that are able to get together, it should be easy to get things done rather than argue all the time."

Miller agreed with Amerein's assessment that the county needs a new jail, but, he said if he is elected, it will take time for him to get acquainted with each county department and make a good assessment of needs.

"They are not there anymore. There aren't as many people paying taxes anymore. We need to draw people back here," he said.

He said further investigation is needed as to why businesses aren't locating in Dayton.

He said that a farm implement store or even a sawmill is not a far-fetched idea for Dayton.

"Let's attract some businesses, get more people good living wage jobs, and it would solve a lot of our problems. We should be a thriving small community, not one that is fighting for existence."

Helm said he leads by example and has accomplished the objectives he set for the Sheriff's Office when he ran for office against Deputy Jenkins four years ago, such as establishing a community-oriented policing program, increasing staffing, increasing interagency collaboration, and working on proactive law enforcement. He has worked under two prior sheriffs in the county as Chief Deputy.

Helm referred to himself as a "constitutional sheriff." He said that means everyone has equal access to the law, and anyone can come to him because he has an open-door policy.

"Without responsibility and accountability, there never will be reliability," Jenkins said.

Jenkins recounted his many local volunteer activities and his 23 years in law enforcement in Columbia County. His work for the county includes specialization in drug law enforcement, during which time he has trained many officers.

"I feel that being involved and helping anybody and everybody to succeed is what matters," he said.

Both men believe the drug problem, especially Fentanyl, to be the county's most significant law enforcement issue.

Helm said, "People are getting away with motor vehicle thefts pursuits, property crimes, even assaults that do not fit under violent crimes, and we are not allowed to pursue."

Jenkins said staffing levels and scheduling problems in the Sheriff's Office are contributing to that.

Helm said there is always an on-call supervisor, along with an on-call deputy 24 hours each day. He promised 24-hour coverage after the two latest recruits graduate from Police Academy.

Helm said the biggest need is for increased training for the officers.

Jenkins said building trust in the community is the most significant need, and that needs to happen before anything else.

The JMPD would also be a junior taxing district.

"That District has been pushed forward by a group of folks who are really, really committed to get a pool back in Dayton," he told the audience.

The ballot measure will ask two things of voters: One, whether to approve the formation of the JMPD and two, who will serve on the commission.

Su'euga said the pool would be built with grants and other funding sources, and the operations and maintenance would be funded through special taxation. He explained that the current RCW statutory aggregate tax limit for the proposed district is $5.90 per $1,000 assessed property valuation.

"It (the JMPD) has to be approved by the voters. No matter what, you always have the opportunity to say yes or no."

The podium was then turned over to candidates running for a position on the JMPD.

The candidates spoke about their reasons for applying and how they would prioritize recreational needs in the community.

Joint Metropolitan Park District candidates who were absent from the forum were; Charles Levy, running for Position 1, Dave Schreck for Position 3, and Chris Slack, Paula Murdock, and Robert Yost, for Position 4.

Natasha Hill, the Democrat running against incumbent Cathy McMorris Rodgers for Washington's 5th Congressional District, was the first to speak.

Hill is a fourth-generation eastern Washingtonian. As a Spokane attorney, Hill represents a diverse clientele. She said her skill set will be invaluable if elected to represent the 5th district's twelve counties in Washington D.C.

She said she has heard from people telling her they need a strengthened workforce, fair wages, job safety, and access to quality health care. They have also talked to her about the need for affordable preschool and childcare, so they can work and contribute to their families and communities.

One other thing Hill has heard, is how tired people are with the current climate of political extremism.

As a Black woman, she said she knows what it is like to be fearful of hate groups.

As an attorney, Hill has studied the U.S. Constitution, which sets forth certain civil rights and liberties for all people, and she believes in the Rule of Law.

Hill was asked about the role of the government in defeating authoritarian movements in the U.S. and abroad.

"We are a beacon of hope across the world in terms of what a democracy can look like and do, but we have to make sure we are not allowing somebody to come in and overshadow an entire political system, and an entire party to try and rig the rules in favor of themselves."

"I don't believe the right to choose reproductive health care, or whether to have an abortion is any different than your right to choose a vaccination," she said. "I am not going to mandate anything once I am elected.

When asked about removing the lower Snake River dams, she is not in favor. She said she is concerned about the viability of salmon, but also the effects of removing dams on the agriculture industry.

"We haven't invested in the infrastructure we need to replace what we are going to lose if we just shut down the dams," she said.

Hill said a long-term plan and coordination on the part of the federal, state, and local governments, along with adequate funding, will be necessary before dams are removed.

Planning is also essential when it comes to climate change, Hill said. Reliance on fossil fuels and the lack of planning for it is causing harm to our collective health. She said she is concerned about prolonged drought and its effects on public health.

Her opponent, Cathy McMorris Rogers was not in attendance at the forum.