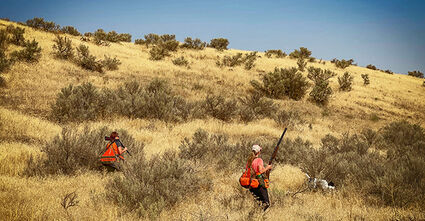 Smoke hung like a heavy fog in the Palouse River canyon, making for a simultaneously mesmerizing yet apocalyptic scene. The sun appeared ablaze, blood-orange behind the smoke as it climbed above the dark basalt bluffs.

Ahead, the moon was falling behind the horizon over Connell as if retreating from the sun. It was massive and glowing orange but confirmed that the smoke was less intense over the miles ahead. Good news for the Blue Mountain Pheasant Forever's first-ever Women on the Wing upland hunt – "Girls and Gun Dogs Get Ready."

Twenty women and their canine companions traveled from a...