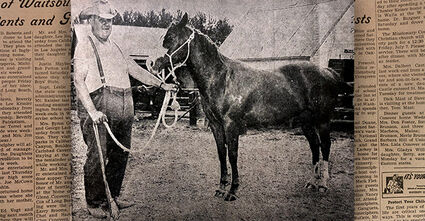 After four years as an FFA rock star at Waitsburg High School and touring the country as an agricultural representative for one year, Christy Poirier is now earing the highest honor in FFA – the American Degree. “I promised myself I would get an American Degree,” Poirier said. And she sure did. Poirier is off in Late October to the National FFA Convention in Indiana to receive her award. According to the FFA website, “the American FFA Degree is awarded to FFA members who have demonstrated the highest level of commitment to FFA and made significant accomplishments in their Supervised Agricultural Experiences.” Poirier will be joined by her former FFA advisor Nicole Abel, and Waitsburg FFA charter member Beka Adams.

Chris Pearson, a senior at Waitsburg High School, has been named the first Abajian Motor Sales – TCI Cablevision Student of the Month. Pearson, the son of Randy and Becky Pearson and the late Mary Pearson, will receive a certificate, a savings bond and a copy of the television commercial in which he is featured as part of the local student recognition program. He will be the subject of a special presentation during the Homecoming Week Assembly Friday afternoon. The assembly will be at 2:30 p.m. on Weller Street. Pearson, a lifelong Waitsburg resident, holds a 3.5 g.p.a. and is a member of the National Honor Society. He is a half-time student of the Running Start program at WWCC and participates in three sports, band and is active in his church.

[Photo Caption] Charles V. “Shanty” Zuger shows Hubbard’s Queen, one of the 60 quarterhorses which will be sold at the Zuger sale in the Walla Walla Fairgrounds on Saturday, September 30, beginning at 12:00 noon. All of the horses to be sold are registered quarterhorses, with J. Ralph Bell of Visalia, California in charge with Dean H. Parker to serve as auctioneer.

Margaret, Marie, and Charles Zuger, triplet children of Mr. and Mrs. Fred Zuger celebrated their first birthday afternoon, September 29 at the home of their parents.

One 3-year colt said to have been lost in the Wenaha Forest Reserve some two or three weeks ago by two Waitsburg boys, has wandered into the road camp near Godman Springs. The owner is requested to come and get the animal.

The Schiltz and Stotts orchard at Bolles Junction commenced picking Jonathan apples the first of the week. They have just completed a large addition on their modern packing house at Bolles. A large crew of workers leave this city at 6:30 o’clock each morning.

W.H. Walker thinks he has a real prolific pumpkin vine which is growing on his acreage just west of town. He has already pulled 40 ripe pumpkins off it and there are yet quite a few which will mature provided the frost will leave them alone for a few days yet.

S.A. Ferguson made a trip to Portland this week to lay in a supply of wagons, hacks, buggies, and agricultural implements.

Conover and Roberts’ threshing outfit is now at work on the divide between Fields Gulch and Eureka Flat. Mr. Conover informed us that another week of good weather will wind up the business in all that country.

Died in Dayton, Monday, Sept. 27 Mrs. Wm. Jasper. The remains were brought to this city for burial.

W.E. Hawks this week purchased the John Catran farm at the north of Whiskey Creek. It is a splendid farm of 200 acres, and he paid $20 per acre. With his family, Mr. Hawks will at once take possession of their new home.