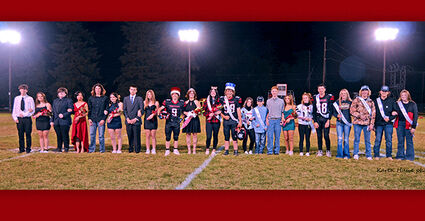 Wednesday the students brought anything but a backpack to school.  Sophomore Jack Karl with a lawn fertilizer spreader and Freshman Karissa Potts with a hope chest were overall winners. Field night Wednesday started with pizza and then the senior girls and the junior boys dominated in the Knookerball games. Seniors Daylan Marlow and Hendrix Groom won the connect four game and the senior girls won the touch football game.  The night ended with a tug-a-war; the sophomores pulled the seniors over the line for the win.

Thursday was senior citizen dress-up day.  Senior Natalie Teal aged gracefully as did her freshman brother, Graycen to win points for their classes.  Thursday afternoon the boys competed in buff puff volleyball.  The seniors and juniors played tough with the seniors pulling out the win.  Thursday night the volleyball team played their homecoming game against Columbia Burbank; losing in four sets.

Friday, Brayden Mohney, a Waitsburg volunteer firefighter, drove a fire truck to escort the high school students and staff in a parade from Preston Hall to Main Street at Banner Bank and back to Preston Hall. The football and volleyball players were followed by cheerleaders, the band and the students and staff.  The group sang the fight song and waved at the supporters that lined the street. Friday night the football team won 53-8, the court was introduced during half time and the students finished the week with the homecoming dance Saturday night which was held in Dayton.   Both schools had a homecoming court. Waitsburg's seniors Claudia Benevides and Garrett Palmer were crowned Queen and King.  Dayton's seniors Genesee Smith and Hudson Reser were crowned Queen and King.

It was a fun-filled week at Waitsburg with the senior class winning spirit week!