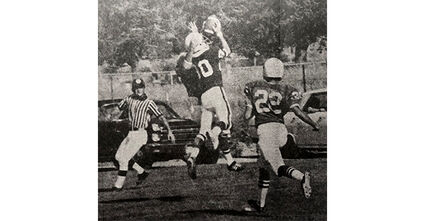 Erma Lee Smith will be honored this Sunday as Pioneer of the Year because her family history in Waitsburg is extensive – she hails from the Hales who date back to 1890 in the Waitsburg area. “I’m Pioneer of the Year and turning 80,” Smith said last week. “I’m flying high.” She learned last spring via a letter from the Waitsburg Historical Society that she would be receiving the award this year at the Pioneer Fall Festival. Smith will be honored on Sunday following the 11 a.m. community church service at the Bruce House Museum on Waitsburg’s Main Street. “It was a great surprise,” she said of the title.

Carrying pails of fresh milk from the cowbarn and churning butter to sell are some of the recollections of Eunice Peck, Pioneer of the Year for the 25th Annual Pioneer Fall Festival to be held Sunday, Sept. 21 at the Bruce Museum in Waitsburg. Peck expects to be joined for the festivities by some siblings and her sons, daughters, grandchildren, great grandchildren and great-great grandchildren. Peck was the first of five children born to W.R. “Bill” and Nona Koontz Reid. Her birthdate is April 1, but she was unsure of the exact year, estimating it to be 1905. She was raised on the Whetstone, north of Waitsburg, living in the same place where she has made her home since 1947.

[Photo Caption] Rob John (80) snags a Mike DeCoria pass for the first Waitsburg score in the game played here last Friday. Rob was closely defended, as this picture shows, but he came down with the ball in hand. Defender running toward the battling pair in the air is Bill Pontarolo (22) for DeSales.

A severe cloudburst and hail storm struck in this area between 10:30 and 11 causing considerable damage in the Alto district north of Waitsburg.

Mr. and Mrs. Jack Penner are the parents of a son, Theodore Gay, born Monday, Sept. 15 at St. Mary Hospital.

The City Counsel is just completing the replacing of over 1500 feet of wood-stave water mains about town, in an effort to stop a number of water leaks.

W. T. Holmar of Burbank, Wa. has traded his 30-acre improved tract near Burbank for the Wardrip Transfer business including one Ford delivery truck and a one-ton truck and the J. H. Wardrip residence property in the western part of town.

Prof. J. L. Dumas and family arrived in the city yesterday afternoon direct from Honolulu, Hawaii. Mr. Dumas says that he is back for a rest, having taught almost continuously for the past four years.

The Christian Church is talking of building on an addition in the near future. A wing is to be built on the south side of the church 24 X 26. According to the plans, four hundred dollars will be used to make the change.

Fred Aldrich shipped his separator and engine to Colfax Tuesday morning. His crew passed through this city on Tuesday by team for the same point. Fred has quite a long “run” around Colfax.