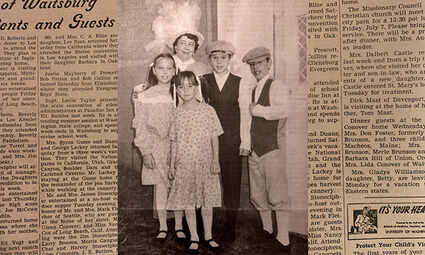 When music teacher Rebecca Wilson was cleaning out some space in her closet, she came across Waitsburg Marching Band Uniforms that had been in retirement for nearly 30 years. Those red, cream and gold uniforms had been worn by hundreds of students from the 1950’s through the mid-1980’s when the polyester and nylon formalwear was traded in for matching polo shirts. Part of the reason the band students no longer wear fancy uniforms is because marching bands aren’t popular at small schools. “It’s just not done as much,” Waitsburg Superintendent Dr. Carol Clarke said.

[Photo Caption] Pick-A-Little Lady Jan Cronkhite poses with her Waitsburg cast members Shannon and Jessica Elliott, Gabe Kiefel and Nathan Hamann prior to a recent performance of “The Music Man.”

Ron Kenney is a friendly, easy-going sort of man with a sense of humor. He likes people and has the reputation for being helpful to others in need. Most everyone in Waitsburg would classify him as an “all-around good guy.” But when harvest time rolls around, a subtle change comes over this fine gentleman. His eyes become slightly glazed, and there is a different set to his jaw. But Ron is not the only one who is changed. Other ranchers in the area become tense. They have slight problems sleeping, and you may see them standing in small knots along Main Street, glancing uneasily at the hill located just north of the Touchet River Bridge.

In the third week of Camp Kiwanis there were two girls, Junior Counselors from Waitsburg: Muriel Roberts and Barbara Cockburn. Sally Gibson served as Counselor the first two weeks then left for Camp Sweyloken near Spokane.

Wheat yields in the Valley are reported to be generally lower than last year due to shattering from heavy winds during July, but the yield is still considered to be normal.

“Trailsend,” the cool and delightful summer camp of Mr. and Mrs. D. C. Rees, who have located on the Touchet above Dayton, is proving one of the popular places of recreation not only for the family, but their many friends as well.

This week will see almost all the machines in this part of the country working in the many wheat fields. Reports of grain threshed so far are that the grain is pretty badly damaged by the recent hot weather.

Fred Romine of Prescott, was kicked in the face by a horse on Tuesday morning, cutting an ugly gash on his lower jaw and his upper lip besides mashing all his teeth in on that side of his face.

Aubert Wisdom, a young man of sixteen, was arrested by the sheriff in Kellogg Hollow Monday. Charged with using language calculated to provoke an assault to C. W. Burnshaw, he was fined the sum of $1 and costs in Justice Holman’s court in Dayton.