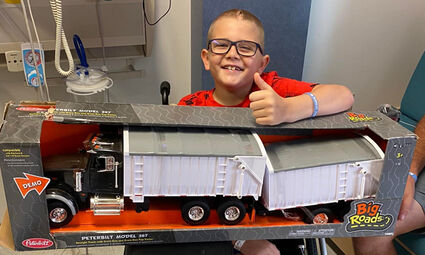 The winner of this truck at the auction brought the toy to a very happy Jace after the fundraiser.

WAITSBURG-Waitsburg is a town that is full of heart, and when it comes to our kids, the community is ready to give at a moment's notice. The Jace Strong Fundraiser dinner, supporting a local nine-year-old battling cancer, was no exception, as nearly 300 people gathered last Saturday to help out.

At the end of May, Jace Grende was rushed to the hospital where it was found that he had a significant brain bleed. He was airlifted to Seattle, where they discovered a large tumor that was pressing against his brainstem.

Since then, Jace has undergone multiple surgeries, and continues to make leaps and bounds in his recovery from surgery. He has a long road ahead of him and his parents, Brad and Abby, have been splitting time between Seattle Children's Hospital and their home in Waitsburg.

Less than three weeks ago, nearly 30 of the Grende's friends met at American 35 to discuss a fundraiser to ease some of the family's financial hardship from the cost of Jace's intensive and extended care.

Jamie McMillen, the owner of Waitsburg Grocery, took on the role of coordinator for the fundraiser. She said she hopes never to put on another event for the same reason but was blown away by the community's response. She knows that she and everyone else involved would do it all over again if needed.

While Janean Struckmeier of Waitsburg stepped in to plan a pulled pork dinner for 300 people, McMillen and others got to work collecting items for an auction.

The list of small businesses from Dayton, Waitsburg, Prescott, and Walla Walla who donated gift packages and items was extensive. The number of private residents who donated one-of-a-kind pieces was equally impressive. Items included a handmade farmhouse-style entertainment stand donated by Charlie and Whitney Mead of Dayton and a gift basket donated by Waitsburg resident Pam Alexenko, loaded with her famous candies and cookies.

McMillen noted that the successful fundraiser reflected local business owners' and residents' commitment to our communities.

Merle Booker of Booker Auctions donated his talents as auctioneer for a live auction after volunteers determined a 120-item silent auction would be a little too big to handle. The crew selected 30 items for the live auction; some were purchased, donated back by the buyer, and sold for a second time.

Walla Walla band, Whiskey Creek, donated their sound system for the evening, while Walla Walla DJ David Long donated use of a system to share a slideshow of Jace. McMillen said the local Girl Scouts jumped in to keep beverages, including water, lemonade, and tea, chilled and filled throughout the event.

"It was just a snowball effect of people giving," McMillen said. "It was unbelievable that we were able to pull that off in less than three weeks. The outpouring of support was very heartwarming. To be in a town like this, it was awesome to see."

The Jace Strong fundraiser is an ongoing effort. Bracelets are still available for sale, and 100% of the proceeds go to the family. If you want to purchase a bracelet, stop by Blush Salon, Waitsburg Grocery, or Table Rock Meat Co. in Dayton.