Stand-Up for The Club Fundraiser a Success 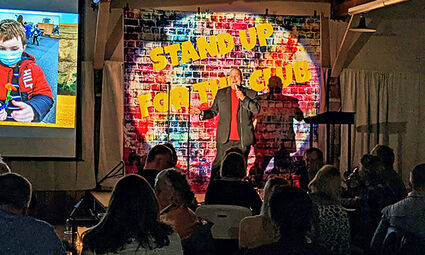 Stand-up comedian Al Goodwin provided the entertainment at the event.

DAYTON- The Club hosted its third annual fundraiser, Stand-Up for The Club, on April 30, 2022, at the Columbia County Fairgrounds Pavilion. Over 150 area residents attended the event. Jim Pearson, Executive Director of The Club, served as master of ceremonies and auctioneer for the event. Attendees were treated to a catered dinner and dessert, live and silent auctions, and a performance from touring stand-up comedian Al Goodwin. Goodwin has been featured on the Fox television program "Laughs", and regularly opens for such comedy heavyweights as Jim Gaffigan.

The event raised a significant amount of funding to support The Club's youth programs. "The generosity of this community is a continual wonder," said Pearson. "Time and again, people have shown their support for the important work we do at The Club. They say it takes a village, and this village is clearly dedicated to the well-being of its young people."