Around the Valley: With Karen Huwe

Around the Valley with Waitsburg FFA teams; three events in three different towns and a 3rd place banner! 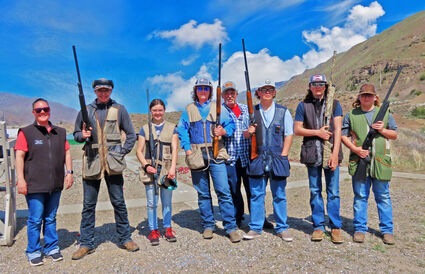 Waitsburg's FFA Vet Science team was successful in a district Vet Science event hosted in Dayton on Wednesday, April 20. The seven FFA students were tested on tool identification (ID), parasite ID, and breed ID and scored by the FFA advisors.

On Friday, April 22, nine FFA students traveled to Asotin for the livestock judging event. The team of Jasper Morrow, Bailey Standring, Megan Forney, Makenna Barron, Jack Karl, Jessika Lambert, McKenzie Lewis, Madison Kaehler and Chasity Paddock placed 31 out of 48 teams. The students individually judged six classes; included were beef, sheep, goats and hogs.  One portion of the event was when the Waitsburg FFA students were given a class to judge as a group and then they had to present a set of oral reasons to explain their results.

On Friday, April 22, six FFA students traveled to Wenatchee to compete in the State Trap Shooting event. An overnight event, the students arrived at Lincoln Rock State Park and unloaded their bags into cabins and relaxed before heading to the gun club for shooting games.

The group consisting of Caleb Barron, Garrett Palmer, Abbi Paolino, Preston Hinchliffe, William Daves, and Hagen Taylor were signed up to shoot in two games; Annie Oakley and partner shooting. In both games, Garret Palmer made it to the finals. Upon their return to the campground, FFA Advisor Nicole Abel, cooked chicken and rice and a chocolate cake in Dutch ovens.

Rising early on Saturday, the team enjoyed another Dutch oven meal for breakfast and then saw some sights before they were scheduled to shoot. The team competed by shooting 100 rounds each. Twenty-five at each of the four stations. Senior Barron and Junior Palmer led their team with scores of 89 and 76 respectively. The final results have not been posted. On the posted students’ shot sheet, they were 10th out of 21 teams; with about four teams yet to finish.