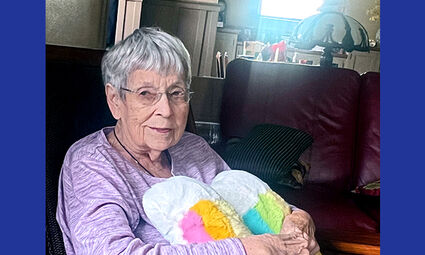 Dorothy Amelia Gagnon Hall, 90, passed away peacefully April 10th at her home in Walla Walla. Dorothy was born on February 26, 1932 at the home of her grandparents William and Nona Reid on the Lower Whetstone. Her parents were Philip Gagnon and E. Eunice Reid Gagnon. She was the youngest of five children. After Philip's death, Eunice then married Carl Peck and another brother was added to her family.

Dorothy was a member of the Days of Real Sport Court and graduated from Waitsburg High School in 1950. Following dental hygienist schooling in Portland, she married William Dorne Hall on April 15th, 1951 in Waitsburg. The couple moved to Yakima where Dorne attended Perry Trade School. After his graduation, they returned to Waitsburg to farm with Dorne's uncle Frank Zuger.

In 1956, Dorothy and Dorne and their 2 daughters moved to Seattle where Dorne worked for Boeing. While there, Dorothy worked at various jobs. Her favorite was creating candles for the Candle Shoppe at Northgate and South Center. She was always active in school programs with her daughters and served as a Camp Fire leader for 15 years.

Dorothy and Dorne loved going salmon fishing in Seiku at every opportunity. It was always a competition to see who caught the biggest fish with Dorne usually catching the bait for Dorothy. Traveling across the U.S. and Canada with their 5th wheel was also one of their passions.

Family was always important to Dorothy. Being of Washington pioneer and Cayuse-French heritage, she was a member of the Frenchtown Foundation and Daughters of the Pioneers. She did extensive genealogy research for both her and Dorne's families. She was also a member of the St Mark's Altar Society, the Waitsburg American Legion Auxiliary and the Waitsburg Historical Society.

Dorothy is survived by daughters Theresa (Rick) Ferguson and Sharon (John) Richter, six grandchildren and six great grandchildren. She also leaves behind two brothers, Cecil (Irene) Gagnon and Carl (Jody) Peck. Preceding her in death was her husband of 67 years, her parents and stepfather, brothers John and Don Gagnon and sister Ellen Richards.

A rosary will be said on Thursday May 12th at 5:30 pm at St. Mark's Catholic Church, 405 W 5th St. in Waitsburg. Funeral mass will be held on Friday May 13th at 10 am at St. Mark's. Graveside services and a luncheon will follow.

Memorial donations may be made to the Frenchtown Foundation, Waitsburg Historical Society or a charity of your choice in care of the Herring Groseclose Funeral Home, 315 W Alder St., Walla Walla, WA 99362.