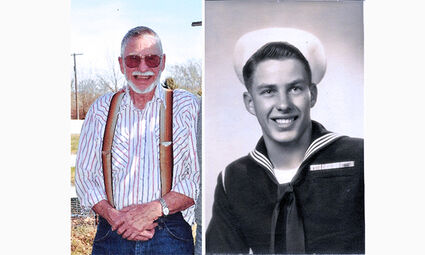 Bill was born March 24, 1927, at Emanuel Hospital in Portland, Oregon to William Winfield Smith and Pauline Meidinger Smith. When Bill was 3 years old Jacqualine Smith, his sister, made the family complete in Payette, Idaho. The family moved to Prescott, Washington about 1933. Bill's father and uncle operated the Prescott Creamery. Bill's job at the Creamery was to wrap butter, test cream, and render lard. His family also had a large chicken farm that supplied many dozens of eggs to local bakeries. The family always had chicken dinner on Sundays.

In March of 1945, Bill was called to duty for the Navy, during his senior year at Prescott High School. He sailed overseas on the USS New Jersey, as a replacement in the Amphibious Division in the Marshall Islands in the South Pacific. When the first A-Bomb fell, everyone on board was issued 3 cans of beer. He was among a crew of 100 that secured the beaches afterward by sinking US landing craft equipment or placing it under protective covers. Bill was discharged in July 1946. He enrolled in Dairy Manufacturing Studies and Chemistry at Washington State University to learn how to make ice cream. He studied at WSU until 1947.

On November 16, 1950, Bill enlisted back into the Navy during the Korean War. This time he served as a Boiler Technician on board the USS Higbee. While in the Navy, Bill was awarded the Korean Service Medal, the China Service Medal, the United Nations Service Medal, The Good Conduct Medal and the National Defense Service Medal. Bill was honorably discharged on September 15, 1954. After Bill's discharge, he distributed fuel for Western Farmers of Walla Walla before working at Washington State Penitentiary.

Bill can be remembered for his caring and gentle nature. He was the type of person that always put other people in front of himself. He was a loving father, grandfather and uncle.

Bill's interests were attending the USS Higbee ship reunions, family history, watching and feeding the wildlife in his front yard and going to the Tuxedo for his much-needed coffee and talking and with people.

He was a member of the American Legion, the Tin Can Sailors National Association of Destroyer Veterans, Walla Walla Elks Club, and the Prescott Alumni Association. He was also involved with the Cub Scouts.

There will be a graveside service for family and friends at Blue Mountain Memorial Gardens on April 2, 2022 at 2:00 p.m. Friends and family are welcome to join the family in Prescott at the Tuxedo Bar and Grill after the graveside.

In lieu of flowers, the family requests donations be made to Walla Walla Veterans Home or the Prescott Alumni Association.