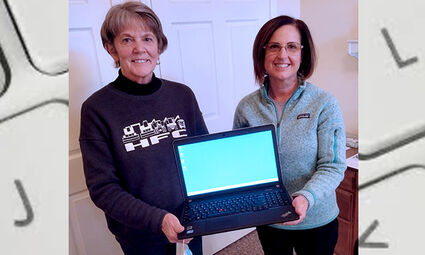 Anita Hutchens and Diana frame accepting a donated laptop to Project Timothy. They said their clients are very appreciative of such a great gift and this is a wonderful service to the community.

DAYTON-Old phones, computers, and tablets are getting a second chance, thanks to an unofficial project created and run by Dayton's Gordon Gerlitz.

Gerlitz, who recently came out of retirement after owning and operating a computer business for nearly twenty years, has been collecting phones and other pieces of technology that were sitting around, unused.

He spends a few hours of his day wiping hard drives and removing any trace of the previous owners. Next, he installs software updates as needed. Once the computer or tablet has been cleaned and rebooted, they are then given to individuals in need.

The focus of GWhiz! is to help senior citizens and others in need in the community said Gerlitz.

Since kicking the project off just two weeks ago, a total of five devices have been given away: Three computers have gone to the Blue Mountain Action Council, and Project Timothy has received two.

If you have an old device that is floating around in a closet, Gerlitz is happy to take them off your hands. Power cords and charging devices are also welcome, especially if they match the donated device. Donors do have the option to choose which local charity they would like to receive the device.

Currently, Gerlitz has been asking for donations on Facebook via the All Things Dayton, WA page. He can also be reached by emailing gordongerlitz1948@gmail.com. If Waitsburg residents would like to donate items, please contact Times reporter Beka Compton at beka@waitsburgtimes.com.