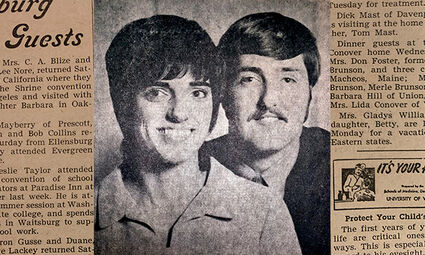 The Waitsburg City Council last week unanimously voted to deny its support of the revitalization of a flood control district that would use taxing powers to help prevent flooding in the Touchet and Coppei rivers. “If our people don’t like raising our water bill $3.50, they’re sure not going to like this,” said Councilman Orville Branson. City Administrator Randy Hinchliffe said the city had previously two flood control districts, but both went defunct because of a lack of volunteers. Recently, a group of citizens, Allison Bond, Leroy Cunningham, David Karl, Jim German and Stan Bly, have thrown their hats in the ring with the hope of revitalizing the group to help alleviate flooding.

When sixteen-year-old Amanda McKinley, daughter of Dan and Krista McKinley of Waitsburg, rides as queen in the parade kicking off the 84th running of the Days of Real Sport, she will be accompanied by her mother and grandmother Dolores Egli Archer to commemorate the first third-generation royalty in DRS history. Amanda’s mother Krista was queen in 1974 and her grandmother was a princess in the 1949 court. The Waitsburg High School sophomore, a life-long resident of Waitsburg, will ride her 15-year-old, 16-hand registered buckskin Quarter Horse, Champagne Monty or “Buck,” in the parade Saturday, May 17.

[Photo Caption] Mr. and Mrs. Charles Fischer of Bellingham, Washington, announce the engagement of their daughter, Barbara Arlene, to Mr. Bruce Edward Abbey, son of Mr. and Mrs. Joe Abbey of Waitsburg. Miss Fischer is a 1970 graduate of Blaine high School and is presently a sophomore at Washington State University, studying dietetics. Abbey is a graduate of Waitsburg High School and is in his second year of study at Walla Walla Community College where he will graduate this spring with an associate degree in applied science – office machine repair. A June, 1972, wedding is planned.

An unusually large audience attended the revival services at the Christian Church Friday evening, when the principal part of the music was given by the boys and girls of the “Smile Chorus” under the leadership of Mrs. R. E. Jones.

A number of cars, including the big truck owned by Wardrip and Sons were stuck in the snow drift at the turn of the state highway north of Minnick station Saturday just after noon. It took about an hour to clear a passage-way thru the snow.

An explosion occurred in the range at the home of G. G. Bickelhaupt last Wednesday morning shortly after the fire was started. The water coil had frozen during the night and was not noticed. The top of the range was blown off and parts of it thrown though a window which was near the stove.

Jack Mullinix was in Walla Walla one day this week. Jack is now buying stock for an Omaha firm.

Misses Birdie Davies and Josephine Nixon gave an Excursion party across the continent from the Atlantic to the Pacific coast at the home of Mr. and Mrs. E. C. Davies on last Friday evening.

P. J. Flinn, representing the Kimball Piano Co. is in the city in the interest of that firm. He has placed a piano in the Armory Hall where any who have any thought of purchasing a piano may see it.