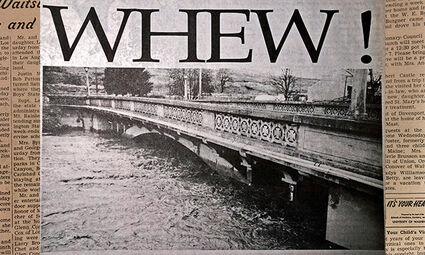 Joanna Lanning is getting ready to take the plunge. Last year, Lanning, and two Waitsburgers, Patty Hazelwood and Vicki Hamann, took a dip in the Columbia River to raise money for Special Olympics of Washington. Lanning is the WP cross country coach, Hazelwood is a special education teacher and cheerleading coach, Hamann is a paraprofessional at the high school. Lanning raised $800 last year. This year her goal is $1,000.

For a while in Waitsburg last Wednesday, New Year’s Day, it looked like “here we go again” as Chinook winds rapidly melted approximately a foot of snow that had been covering the region since Christmas Eve, raising the levels of both the Touchet River and Coppei Creek to flood stage in the early hours of the new year. Salutations of “Happy New Year” were grumbled often between people filling and tying sandbags along the Touchet levee early Wednesday.

[Photo Caption] Wet areas on the Main Street Bridge, in the above photo taken at mid-morning of Jan. 1, show the relatively rapid drop of the river’s level, a welcome sight for all working on sandbags and levees around Waitsburg. Stable temperatures in the mountains and little or no additional rainfall allowed the runoff to continue and the river’s level to drop further.

Waitsburg Lions were guests of the Prescott Lions Club last Tuesday evening, and turned out 30 strong to accept the dinner which was a reward to the Waitsburg club for winning the blood drawing challenge. Jerry Marbach who was the recipient of the blood drawing was present at the meeting and expressed his appreciation for the support of his friends and neighbors. He underwent open heart surgery and said, “The blood must have been excellent, because I came out of the whole thing roaring!” Present at the meeting were three past zone chairmen: Turk Ely of Waitsburg, Dana Straw of Walla Walla and Bob Muzzy of Prescott, now living in Couer de’Alene, Idaho.

Due to the many requests of farmers of the vicinity, the Atkinson Feed and Fuel is planning to install a feed mill and will enlarge the storage space to accommodate the business early this spring.

More than 63 thousand vets are learning modern methods of farming in GI farm training programs under the GI bill.

The Bluebirds finished four scrapbooks before Christmas and presented two to each hospital in Walla Walla for sick children. Mrs. Delbert Castle had the Bluebirds as her guests for a lovely Christmas party.

Misses Wilma Shaffer, Carolyn Bickelhaupt, and Mrs. Ethel Bruce entertained at the Moxey Zuger home on Main Street Friday evening. There were 60 guests present. The evening was spent with dancing, music and games. Refreshments were served.

Mrs. Kate Greer states that she has a few locust posts for sale. Inquire of her.

A very pleasant party was given by Miss Lillian Robinson at the home of her parents at Bolles Junction on New Year’s night to about 25 students of Waitsburg Academy. The guests made quite a jolly party as they passed through town.

Our Main Street presents quite a different appearance since the electric lights have been placed on the different corners. Waitsburg always believes in keeping up with the times.

Three big guns have been ordered for Fort Stevens at the mouth of the Columbia. This looks war-like but it is probably innocent enough. Though in the event of war with Spain it might be an important thing to the Northwest.