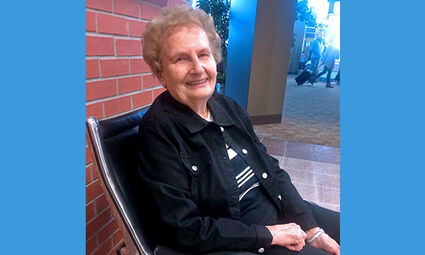 Doris K. Huffman, a longtime Waitsburg school teacher, passed away Monday, November 29, 2021, at the Dayton General Hospital following a brief illness. She was 91. A simple graveside service will be held at the Waitsburg Cemetery on Friday, December 10th, at 2:00 p.m.

A Memorial Service to celebrate her life will be on Sunday, December 12th, at 1:30 p.m. at the First Presbyterian Church of Waitsburg, with Pastor Stan Hughes officiating. Doris was born April 20, 1930, in Walla Walla to Jacob and Kathryna Schmauder Ruff. She was one of four children growing up in the Ruff home, and she attended Bernie Grade School and Walla Walla High School, where she graduated from in 1948. Following graduation, she spent time working to help her brother financially finish college. She then attended Eastern Washington University in Cheney where she was a cheerleader and on the swim team.

Doris had met Marvin Huffman in high school but didn't start dating until she was in college. They married in Walla Walla in 1951. Marvin was serving in the Army while Doris worked for the telephone company. They moved from Walla Walla to Waitsburg in 1955. While the two children; Martin and Deanna were growing up, she worked as a professional seamstress for 11 years. Doris went back to college and completed her Bachelor of Science Degree in 1971 from the Walla Walla College. She began teaching 2nd grade in Waitsburg and was a beloved teacher there for 25 years, and also shared her secrets with students on how to win at checkers.

Doris was active in the Presbyterian Church and sang in the church choir. Her husband Marvin passed away of a heart attack in 1981. Doris remained active in her community as a member of the PEO – Waitsburg Chapter, the DeNova Club, Waitsburg Historical Society and on the town hall committee. She also ran a "hobby business" out of her home making beautiful Victorian lampshades. Over the years she figures she made at least 1,000 of them and they proudly adorn many of the restored Victorian homes in the Walla Walla area. She was also a very talented painter, an author and illustrator of two children's books. Doris was honored to be named Citizen of the Year in 2019 by the Waitsburg Commercial Club.

She will be missed by many in the community but especially by her family; Martin, wife Eileen, Huffman of Lyle, Washington and Deanna, husband Dave, Tipton of Rockwall, Texas; by her five grandchildren of whom she was so proud, Lane Huffman, Tami Bretz, Brady Huffman, Dillon Huffman, and Gloria Stover; and her four great-grandchildren, Harley, Paisley, Hayden and Riley. In addition to her husband Marvin, Doris was preceded in death by her second husband, Don Helgeson, her brother Ralph, and her sisters, Esther and Florence.

The family suggests memorial gifts in her memory be made to the First Presbyterian Church of Waitsburg, P.O. Box 397, Waitsburg, WA. 99361. Hubbard-Rogg Funeral Home in Dayton is caring for the family.