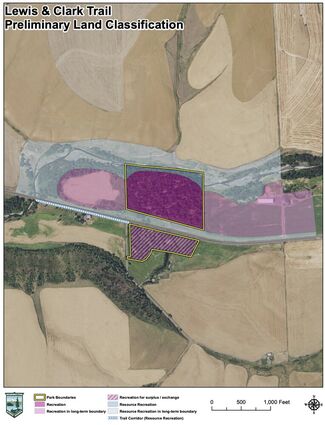 Washington State Parks held a public meeting on November 8, 2021, at 6 PM in Dayton Elementary School multipurpose room. Although the public sparsely attended the meeting, the topics covered will affect many in the Touchet Valley.

The representatives from Washington State Parks presented preliminary recommendations from the Land Classification and Long-Term Boundary planning for Lyons Ferry State Park, Palouse Falls State Park, and Lewis and Clark Trail State Park. These recommendations are from stage three of a four-stage process as part of the Park Management Plan.

The proposed changes for the parks are listed below.

Located on both sides of Highway 12 between Waitsburg and Dayton, the park is subject to frequent flooding. With easy access from the highway, the south side parking lot is often used as a highway rest area. Access to this portion of the park from the larger section is dangerous as it involves crossing a rather busy highway.

Two possible solutions were proposed to address these problems. Safer access between the south and north portions of the park could include a crossing built under the highway at the bridge over the Touchet River. Alternatively, the entire park south of Highway 12 could be designated surplus and made available to another state agency.

Other plans for the park include expansion along the Touchet River north of Highway 12. The State Park System does not own this land, but representatives have contacted the current landowner about a possible purchase, land swap, or other arrangements. These additions could potentially triple the current park size, substantially increasing the area used by campers and offering more river access and trail possibilities.

The hope is to develop some of the new campsites with electrical, water, and sewer hookups. These quality improvements could significantly increase the park’s popularity, boost the area’s economy, and help handle the recent boom in the popularity of camping in our state parks.

Unlike Lewis and Clark Trail, the plan for Palouse Falls is to eliminate the eleven primitive campsites and now allow overnight camping. Rules of the Park have been evolving, particularly regarding the trails that lead to the top of the falls and the pool below the falls. Those trails are not now authorized, and some are in violation of the private property rights of the railroad and adjacent landowners, and all constitute a safety risk to hikers. Vandalism of culturally significant formations, such as spray-painting graffiti, has also been a problem for the park. The plan for the park would keep these restrictions in effect.

The park often suffers from traffic issues during peak times, and visitors are sometimes forced to wait up to two hours to arrive at the parking area. Recommendations include increased parking for visitors and a possible visitors’ center to be constructed near the Highway 261 entrance. The center would include a vehicle turnaround so visitors who arrive and discover the park too crowded for their taste can quickly turn around.

Another recommendation would be to designate the surrounding privately owned land to remain natural. The owner is in favor of the designation. This would prevent land use development, including wind turbines, that might destroy the overall view and ambiance of the park. Pre-registration may be required to help control the number of visitors to the park.

Most significantly, for this park, the recommendation is to revitalize the camping sites on the low bluff on the west side of Highway 261. In the past, there had been no hookup camping at the bluff, which is no longer available. The new plan includes reintroducing a range of campsite availability, up to full-service campsites. It is expected that these campsites would not compete with the Lyon’s Ferry KOA but instead work to increase the KOA’s popularity, particularly for the camp store and cafe. There would be no change to the designated heritage area, allowing foot traffic to the Snake River.

The complete recommendations for these parks should be finalized by the end of this year. If any member of the public wishes to make comments or learn more about this process, they may do so at the following URL: https://parks.state.wa.us/1072/Palouse-Falls-Lyons-Ferry-Lewis-and-Clar