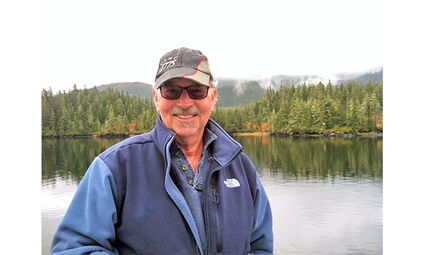 Gerald Lee Wood was born into the home of Francis and Mabel Wood in Walla Walla, WA on New Year's Day in 1948. He completed their farming family of six boys and one girl and brought a bright spark of light into the world with his spirit. He was received by his loving creator on October 31, 2021, in Spokane, WA.

Jerry was preceded in death by his parents, brothers Dan, Frank, George, John, & Jim Wood, and his wife, Kelley Wood.

Jerry grew up on a wheat farm/animal ranch near Waitsburg, WA. He was an athlete and an active member of the FFA. He graduated from Waitsburg High School in 1966 and married his high school sweetheart Barbara White. They were married 16 years and had five children.

Jerry spent a year in a flight program at Big Bend community college and earned his bachelor's degree in Outdoor Recreation from Eastern Washington University. Inspired by his older brothers who were pilots in the USAF, Jerry joined the United States Marine Corps and served from 1971-1977 as a Naval Aviator. He flew the A4, T2, & KC 130. A highlight of his career was landing a T2 on a Lexington Carrier in the Gulf of Mexico. He completed his service at the rank of 1st Lieutenant.

After exiting the Marine Corp, Jerry began his career with the Washington Water Power (Avista) in Chewelah, WA. During this time, after a divorce, he met the love of his life, Kelley Weeks. They married in February 1983 and had two children together.

Jerry and Kelley were active members in the Chewelah community and valued family. They enjoyed nearly 36 years together supporting their kids and grandkids' activities.

Jerry was one of a kind and made the world a better place with his gentle spirit and fun sense of humor. He was a hardworking, thoughtful, kind, honest, intelligent, and warm individual. He enjoyed flying and taking beautiful aerial photos in his self-built airplane during his midlife and grew to especially enjoy golfing during his later years. More than anything he treasured spending time with loved ones and his love will live on forever through the countless lives he touched.

Services will be held at Heritage Funeral Home in Spokane, WA on November 20th at 2:00 p.m.