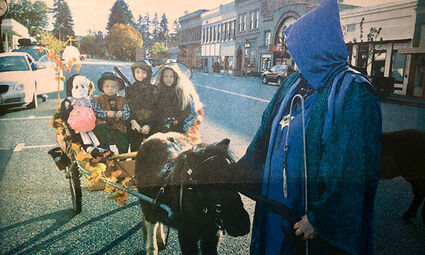 Waitsburg Fire Department Captain Brian Callahan thought getting to the fire department five minutes before 5 p.m. would be just fine on Halloween last Monday. However, when he showed up, there were already parents waiting with their witches, monsters, ghosts, and princesses. This Halloween was the first year the Waitsburg Fire Department provided blinking safety flashers and candy for the local children as they donned costumes and went door to door for treats.

Roger Mcgee, a transplanted native of the Louisiana bayous, acquired a burning desire shortly after he hit the Walla Walla country. That wish was to do a sculpture of Walla Walla-born Gen. Jonathan M. Wainwright and to re-name the Veterans Administration hospital for the famous World War II general. But all McGee had at the time, back in the late 1970’s, was the desire and hope and dream. He had loved art and working with his hands all of his life in Louisiana, but he was not a sculptor! So, he set out to be one, did so and has become a highly recognized one, at that. His heroic-sized Wainwright, due to be unveiled in the main parade grounds at the hospital Nov. 11, testifies to this man’s self-taught abilities.

Waitsburg welcomes a new businessman – R. O. “Bob” Lowrey who comes to town from Kansas and Texas. Bob is in charge of the Trading Post in the former IOOF building on Main Street, which he is managing for his brother Jim of Walla Walla. Bob and his wife Nancy have five children: Carrie, Mike, Donna, Randy, and Loretta. They live at 412 East 6th. Bob was from Coffeyville, Kansas, later moved to Houston, Texas, where he has been living for the past nine years. Bob said that he likes the change of pace in Waitsburg – “It’s so much different from Houston where everything was dog-eat-dog, or worse!” Phil Monfort, owner of the building, has done a good job painting up the premises and creating this new business in town.

Weather in Waitsburg during the past week has been changeable with a hailstorm last Thursday followed by a few flakes of snow which quickly disappeared.

Bob Callahan, Jack McCaw, Billy Smith, Junior Dutton and Cline Smith, all of Prescott, were home last weekend to visit their parents and attend the days of 49.

Joan Stonecipher was elected president of the American Legion Auxiliary when the group met Monday night.

The Waitsburg Floricultural Society received this week their shipment of choice varieties of bulbs, over 1,000 of which they presented to Preston Park.

Several Waitsburg boys got mixed up with the police force Monday night, charged with carrying their Halloween pranks too far. They were brought to the city “strong box” but were permitted to go after depositing bail in the amount of $5 each.

The mills for making oatmeal and flour in Tacoma and Seattle are running night and day, and yet are behind in their orders. The demand for flour from the Orient, has been simply phenomenal, and the rolled oats trade cannot be supplied by the present mills.

The Republicans of the city had a grand ratification of the election of McKinley on Thursday night. A huge bonfire and the booming of cannon kept the people awake till midnight.

The bicycle cure for insanity, recommended by a learned French physician may be reckoned among homeopathic remedies - wheels cure wheels.