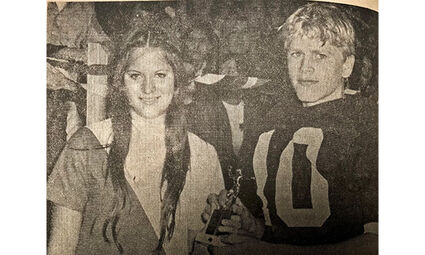 As Waitsburg becomes increasingly popular among travelers, more small-scale, down-home lodging is springing up around town to accommodate them, according to Karen Stanton-Gregutt, owner of Waitsburg Cottages. Together with the owners of several other lodging establishments, Stanton-Gregutt presented to members of the Commercial Club last week an overview of existing and new properties where quality accommodations are available for nightly and weekly stays. Based on the Times calculations, there should be at least 30 lodging rooms with an occupancy of at least 50 available by next spring when the hotel under development next to the Main Street post office is expected to be open.

A recent report about not one but several Bigfoots seen in the Mill Creek Watershed has sparked anew the question: Is there a family of Bigfoots resident in these mountains near Walla Walla? Over the years since 1982, when ex-Forest Service watershed patrol rider Paul Freeman reported his near confrontation with a Bigfoot, this issue has surfaced. There is at least one instance of a sighting of a large Bigfoot accompanied by a smaller one, suggesting an adult and its “teenage” young. As memory serves, there was such a sighting on Mill Creek within 10 miles of Walla Walla. Then, a couple of years ago, two hunters were on the mountain road out of Dayton in the Robinette Mountain vicinity as darkness was falling. In this report, the men saw what each was certain was a Bigfoot and a smaller one as the creatures headed into the timber at the edge of a plowed field. Since it was getting dark, neither hunter opted to pursue the creatures to get any closer, they said.

[Photo Caption] Jill Zuger presents a trophy to David McKinley who was selected as outstanding freshman football player for the 1971 season.

A constable for the City of Waitsburg will be voted on at the general election Nov. 5th by writing in the name on the ballot.

Wanda Ferrell and Kenneth Elkin were married at Elk, Nev. on Oct 16. They were honored at a dinner at the Frank Zuger Home Saturday evening.

The ladies of the Aloha Club entertained at the home of Mrs. W. B. Shaffer on 4th Street Friday afternoon, Oct. 21. There were 80 guests. The decorations were red geraniums, autumn leaves and salvia. Refreshments were served later in the afternoon.

An extra wheat train consisting of 27 loaded and six empty cars, was derailed near Wallula on Tuesday morning. The fireman and head brakeman were killed outright while the engineer had his shoulder dislocated. A broken rail was the cause.

The Northwest Horticulturist says: the first wheat ever sown in the state of Washington was put in the ground now occupied by Mr. C. L. White’s nursery, Walla Walla; the seed cost $5 per bushel, it having been brought from the Dalles, Oregon, on mules, in 1859. It was sown by John A. Simms and numerous are the stories related of the fabulous amounts he made on his venture.