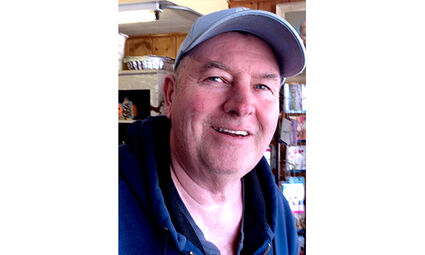 He was born in Walla Walla on February 23, 1954, to Donald M. and Wilma Waggoner Thomas, of Waitsburg.

As a youngster, he showed beef cattle as a 4-H member and later, Future Farmers of America (FFA).

He attended Waitsburg Schools, graduating in 1972. After graduation, he joined his father in the family farming operation.

He met Donna Anderson of Ellensburg, Wash., at a plowing bee and they married on January 3, 1981. The couple set up housekeeping in Waitsburg. They divorced in 1999.

Jay took over farming operations in 1985. He and Donna swapped houses with Don and Wilma, moving them to the house at the corner of Sixth and Orchard, and Jay and Donna moving to the ranch house on the Middle Waitsburg Road, the moves taking place at the same time.

Jay shared a passion for mule power with his father, accompanying him to mule shows with a matched set of eight sorrel mules, in the 1970s and 1980s. Initially, farmers around the region would host "plow days," and Don and Jay hosted one in Waitsburg for several years. They also appeared in innumerable parades in the region.

In the early 1980s, they restored a John Deere 36B pull combine, and put together a 27-mule hitch of all-sorrel mules to demonstrate mule-powered wheat harvest in 1982, 1983 and 1985. Jay and Don also appeared in a Rainier Beer commercial in 1977, their mules pulling a wagon made to look like a cold pack of beer, pulling a smaller wagon with a giant pretzel. The video is viewable on YouTube.

Camping via horseback and pack mules in the mountains was another passion Jay enjoyed, leading summertime and elk-hunting excursions to Trout Creek in the Blues with brother Dwight, cousin Joe, Carl Nelsen, Pat Mohney and others. Jay and Donna especially enjoyed a 10-day trip in the Pasayten Wilderness in the North Cascades with a string of pack mules.

He also enjoyed flying radio-controlled airplanes, which he did with his characteristic gusto.

Jay will be remembered as being a friend to lots of people, and for his ability to tell jokes and recite lengthy poetry, in his distinctive voice. You always knew where you stood with Jay: he told it like it was. He will be a sorely missed member of the Waitsburg community.

He is survived by two brothers and a sister, Donna (Ron) Thomas Manley of Puyallup, Wash.; Gary (Jill) Thomas of Waitsburg; and Dwight (Cindy) Thomas, of Cheney, Wash.; numerous nieces and nephews, and grand nieces and nephews.

He was preceded in death by his parents.

A private family burial is planned at the Waitsburg City Cemetery. A Celebration of Life is being planned in September at Waitsburg.