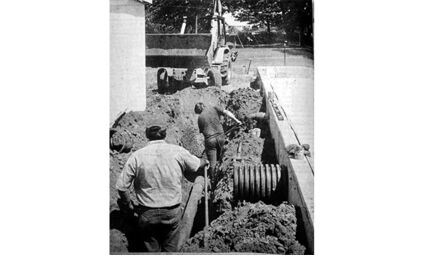 Twenty-five years ago, on August 1, 1996-The Waitsburg swimming pool project is progressing. City workers George Niño, Sr., William Wilson, and Tim Pettichord recently finished installing drainpipe and were readying the area for a time when the decking will be poured. The city council hopes to finish the project this fall.

For T. J. Hersey, running her father's grocery store in Dayton is a way for him to live on. Hersey is now a third-generation grocer in the town. Her grandfather, H. W. Stephenson, came to Dayton in 1938 from Portland, Ore., and he opened up a grocery in 1944. Hersey's father, Gail Bennet, took over in 1961 and ran the neighborhood Steve's Grocery on Fourth Street until he passed away last year.