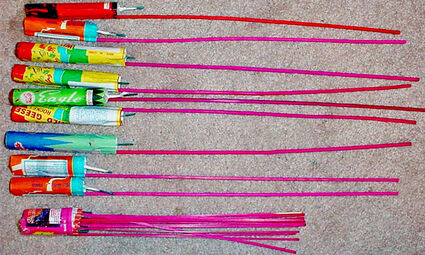 Bottle rockets, similar to ones found by a Waitsburg resident in her yard after July 4th celebrations on her street. These and other illegal firewords are listed on the Washington State Patrol website.. They may not be used in Washington state, even without a firework ban.

The potential ban was discussed at the July 21 City Council meeting. If a ban was implemented the soonest it could take effect in Waitsburg would be June 2023.

Washington State laws govern the regulation of fireworks, including what days fireworks can be sold and when they may be discharged. The laws do allow some local regulation, allowing cities and counties the opportunity to prohibit the sale and discharge of fireworks altogether.

Any local fireworks ordinances that are more restrictive than state law may not take effect until at least one year after adoption, according to the Municipal Research and Services Centers of Washington (MRSC).

The current extreme fire conditions had local communities asking for emergency bans of neighborhood use this year. State law requires municipalities to enact local legislation concerning firework bans by June 26, one full year before being enforced. There is no exception for emergency fireworks bans in response to drought, extreme heat, or other circumstances. Across Washington, many cities and counties, including the City of Leavenworth, City of Poulsbo, and Thurston and Whatcom Counties, have ordinances in place that allow fire officials, the mayor, or other designated persons to declare an emergency ban. Each municipality had waited for one year before their ordinance was effective.

During the July regular meeting, council members were asked if it would be possible for the city to put on a firework display on the Fourth of July. This would let families still enjoy the tradition of fireworks and lessen the number of fireworks discharged by individuals in neighborhoods. Mayor Marty Dunn said that while the City of Waitsburg has never put on a public display, he did remember times where families gathered at the football fields to light off fireworks. He said that the council would be continuing the discussion in the future.

City attorney Jared Hawkins said that he would be exploring verbiage for a new ordinance regarding fireworks.