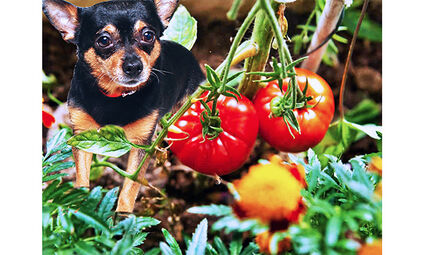 I am now officially and happily the Ice Queen. Just in time for the brutal heat wave that struck this week, we finally have a functioning ice machine. Sometimes, the small pleasures in life (albeit this time an expensive one) provide much-needed satisfaction and relief. Relief that I don't have to stop to buy and then carry 40-50 pounds of ice into the restaurant daily. More importantly, I can generously fill our patrons' glasses with ice water, lemonade, or iced tea. This new modern machine even has a cool blue interior light, and an exterior LED light that consistently says "Full," which makes me very happy.

We are surviving and humming along in the café. Thanks to a supportive community, vaccinations, masks when needed, and large bottles of Claritin and Advil, we made it through All Wheels Weekend and Sunday's Dayton Garden Tour, alive and only slightly unscathed.

Last night, two ladies came to dine with us who had been referred by our new friends and owners of the Barn B & B in Walla Walla. I was determined to make sure they had a memorable evening at the Weinhard Café. When they arrived, there were already four tables of diners, some from Dayton, others from Waitsburg, who all knew each other and were having lively conversations amongst their tables.

The cacophony of laughter, birthday songs, and applause bouncing off the brick walls although happily deafening, was a little worrying to me; luckily, as it turned out, the two ladies loved it and assumed we were hosting a large party. They were amazed when we told them that this was a typical Saturday night at the Weinhard and truly a lively example of community!

Meanwhile, my garden is suffering. Admittedly, there has been a lack of attention on my part. But at least the heatwave has provided a viable scapegoat for the sad shape of my eggplant and peppers. I promised myself that I would weed today, but it's over 100 degrees and just not appealing, so much so, that I agreed to go with Daniel to Home Depot, my least favorite place in the world. I compromised this time, because I am certain they have air conditioning. I can live with a few less eggplants in my life.

Yet, the zucchini just keeps coming. Even the skinny green striped ones that I thought were dead, have come to life and are producing fruit like crazy. De ja vu!

Our garden competition is frustrating, and still holds many Waitsburg garden mysteries. Though my cucumber plant looks anemic with it's one long skinny vine, we've already had two cucumbers for salad from that plant. Daniel's cucumber plant is gigantic and has vines taking over a 14-foot planter but has not produced one cucumber.

My phone app that identifies plants from pictures, told me that I had a second cucumber plant growing in another part of the garden. It turned out to be a hollyhock, so no cumcumbers. Evidently, that app is not infallible.

My zinnias that were spectacular last year, have done zip this year. There is not one to be found! However, petunias have somehow shown up and I seem to have a monopoly on goat head! It is spreading like wildfire and seems to thrive in heat waves.

While Mugsy thrashed and gorged on our tomato plants last year, he obviously dropped seeds all over, because we now have a giant hedge of random tomato plants taking over the back of the yard. I guess we should be grateful that even Mugsy has become a productive Waitsburg gardener.