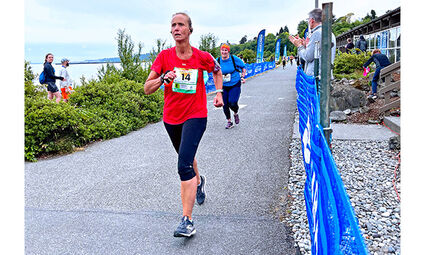 Runners competing in the North Olympic Discovery Marathon had a nice, five-mile-long finish along the water. Ann finished her run in just over four hours and is already thinking about how she can be faster next race.

WAITSBURG-Long-time Waitsburg resident Ann Adams has been running for more than a decade, but it wasn't until earlier this month that she hit one of the ultimate running milestones: She finished her first marathon, running more than 26 miles in just over four hours, at the North Olympic Discovery Marathon in Port Angeles, Wash.

The North Olympic Discovery Marathon follows the Olympic Discovery Trail, which stretches roughly 100 miles from Port Angeles to Port Townsend. The course zigged and zagged through the lush rainforest, the lively town of Sequim, and around the quaint tourism district...