The June Hogs of the Columbia Basin 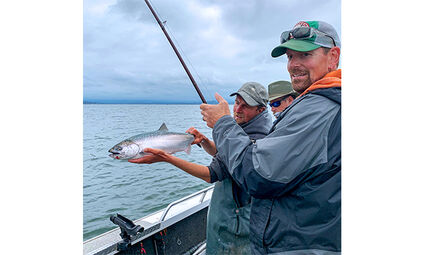 Brad Trumbo with a small, bright king from the Buoy 10 area of the lower Columbia River.

Our jet sled bobbed near the infamous "Buoy 10" in the mouth of the Columbia River. It was a stormy September afternoon with angry Pacific surf bullying its wave action far upriver. Coho were the target, yet no one aboard complained at the prospects of landing anything willing to trounce the cut herring corkscrewing behind the boat as we drifted.

Kicking back, we enjoyed the ride, and the experience of fellow fishermen jumping hurriedly for a bent rod, ripped from the complacency of a lull in the action and casual conversation. I had passed a dozen salmon to the three other anglers. They finally insisted the next bite was mine.

Diving for the gunnel as the port side rod doubled hard on the strike, drag began spooling noisily from the reel. The run was fast and strong, unlike the coho hook-ups of the day. Only a Chinook (king) salmon can pack a tuna-like punch into a chrome freshwater torpedo.

Following the initial run, the 26-inch king came in quickly. Not my first king, but certainly the most striking. Dime-bright scales glistened under the overcast sky as if the fish had been dipped in glitter. Its dorsal was painted in muted teal, and its black speckling popped like sequins. It was no "June Hog," but an unforgettable fish, nevertheless.

On the other hand, June Hogs have earned their place in natural and sporting history as king salmon of the Columbia Basin past. Before commercial fisheries and dams made their way to the Columbia River, kings breaching 100 pounds swam over 1,000 miles to their spawning grounds in British Columbia. Genetically speaking, these fish were the same kings that continue to return to the Columbia River year after year, but a population that grew five or more years in the Pacific Ocean before returning to spawn.

Much larger fish than those of lower river populations, historical accounts suggest they reached nearly 50 inches in length and were football-shaped, their bodies rich with fat stores. Their long journey inland led these fish to enter the Columbia River in early summer, earning the moniker June Hog. But the trek to their natal tributaries took time, with spawning occurring in late summer or early fall.

Once a Native American subsistence staple, the superior quality, and flavor of these massive fish quickly became a prized food item for all as the west was developed. The first canaries on the Columbia River opened in the mid-1800s. A grand haul by the Seufert Brothers Cannery in The Dalles, Oregon, landed 2.5 million cans of "Royal Chinook" in an Astoria, Oregon warehouse around the turn of the century. The table fare of the June Hogs deserving of the "Royal" marketing crown. At the peak of the run, canneries could pull several tons each day via fish-wheel.

With harvest affecting the salmon populations, the average size of the June Hogs began to decline by the early 1900s, decreasing as much as 50 percent by 1922. Thirty pounds was once the bottom end of their weight range, but today, a 30-pound Columbia River Chinook is news-worthy.

Modern fishery management and harvest have resulted in an increased proportion of "jacks," which are basically trout-sized salmon, that return within a year of migrating to the ocean and may never have left the Columbia River estuary. But the final blow to the massive June Hogs came long ago in the form of the Grand Coulee Dam.

Built without fish passage, the June Hogs racing for British Columbia were stopped cold at Grand Coulee by 1940. The populations spawning downstream in Washington tributaries could do so successfully with a more modest size and fat stores, their migration being half as long or difficult.

The June Hogs of historic proportions may never grace the Columbia Basin again, yet, kings in the 20-pound range are still common. Last month, I wound my way through the visitor center halls at Ice Harbor Dam and stood in awe at the fishway viewing window. Kings of all sizes cruised by, shooting nervously through the fish counting slot. According to the counting booth attendee, the kings are returning well thus far in 2021, but the overall projection for the spring run is lower than last year.

At present, myriad challenges are pressuring salmon and steelhead populations through the Pacific Basin. While special interest groups lobby against the lower Snake River dams, they fail to present the big picture, meaning dams are but a piece of the complicated salmon life history puzzle. Ecosystem-wide reform of fishery and harvest management, habitat restoration, invasive species management, and other environmental improvements in concert are necessary to achieve genuine population "recovery."

Nevertheless, salmon are resilient, enduring all we've thrown at them for more than a century. With mindful management among stakeholders and improvements in environmental conditions, the kings of the Columbia Basin will persist.

Middle: Brad Trumbo with a small, bright king from the Buoy 10 area of the lower Columbia River.

Bottom: A haul of June Hogs on the floor of the Seufert Brothers Cannery, The Dalles, OR approximately 1901.