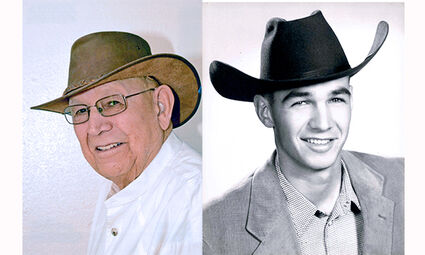 Bill was born to Charles "Shanty" and Florence (Buroker) Zuger on March 1, 1931 in Walla Walla, WA. Bill grew up on the Zuger family ranch west of Waitsburg where he attended Bolles Junction School. He graduated in 1949 from Waitsburg High School. After high school, Bill attended Washington State College (now WSU), where he joined the Sigma Nu fraternity. While attending WSC, he met the love of his life, Kay Henry. In 1955, Bill earned a B.A. in English and Social Studies. Following graduation, Bill began a career in farming, raising wheat with his father on the family farm. He married Kay Henry on September 9, 1956. Together they had three children, Greg Henry, Ramona Delmar, and Rebecca Lynn.

Bill retired from farming in 1985, when son Greg took over the operation. Bill then began a second career as shop foreman for the McGregor Company. He was known for his reputation as a "wizard" with mechanics. Bill had an amazing ability to fabricate machinery. He could visualize a project and make it happen. He retired from the McGregor Co. in 2002.

After a blessed 42 years of marriage, Kay passed away in 1999. In 2000, Bill married Janice Roberts Rocconella. He and Jan enjoyed traveling in their RV, going to Alaska many times to visit her son and to fish.

Bill was a charter member of Waitsburg Lions Club and a Past Master of Waitsburg Masonic Lodge No. 16 F&AM, a member of El Katif Shrine, the Scottish Rite and the Blue Mountain Shrine. He served on the Southeastern Washington Fair Board and the Days of Real Sport Board. He was President of the Waitsburg Commercial Club, served 6 years on Waitsburg City Council, followed by three years as Mayor (1998-2000). In 1984, he received the Lion of the Year Award. He was named 'Citizen of the Year' in 1995 by the Commercial Club and 'Pioneer of the Year' in 2010 by the Waitsburg Historical Society.

Bill enjoyed fishing and hunting. He shared many fond memories of hunting trips with his grandfather Henry, whom he adored.

Bill will be remembered by many as a true gentleman. His ingenuity, resourcefulness and volunteerism always marked his lifestyle, career and contributions to the community. He was a mentor to numerous young people and a true friend to many.

It cannot be denied that Henry Vern "Bill" Zuger fought the good fight more than once in his life. He recognized the power of his God-given choices, and he knew the consequences of living with them.

"I have fought the good fight, I have finished the race, I have kept the faith. Now there is in store for me the crown of righteousness, which the Lord, the righteous Judge, will award to me on that day and not only to me, but also to all who have longed for his appearing." 2 Timothy 4:7-8

Bill is survived by his son Greg (Kelly) Zuger of Waitsburg, WA and their children – Brittany, Jace, and Justin; his daughters Ramona Clark of Chaska MN and Rebecca (Martin) Dunn of Waitsburg, WA and their children – Brandon and Tyson Cole and Jacob Dunn. He is also survived by his wife of 21 years, Jan Zuger, stepsons, David Dunn of Salem, OR and Michael "Terry" Dunn of North Pole, AK, and stepdaughter, Nicolette (Bob) Anderson of Athena, OR. He is also survived by numerous great-grandchildren. Bill was preceded in death by his parents, Shanty and Florence Zuger, his wife, Kay and his brother, Fred "Fritz" Zuger.

A private graveside service with Masonic rites will be held for family and close friends on Friday, April 30, 2021 at 2:00 PM at the Blue Mountain Memorial Gardens in College Place, WA. In lieu of flowers, memorial contributions may be made to the Shriner's Hospital for Children in Spokane, Alzheimer's Association or Walla Walla Humane Society through Herring Groseclose Funeral Home, 315 W Alder St, Walla Walla, WA. Online condolences may be left for the family at http://www.herringgroseclose.com.