Bring bees to your flower garden 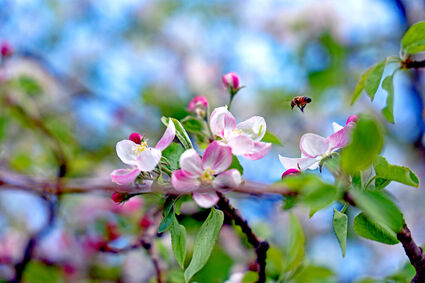 The well-aged golden delicious tree is one of my favorite parts of my property. It has been buzzing this spring.

Last week, the sounds of spring were loud and clear in my backyard. Birds were singing, kids could be heard playing all up and down the block, and my apple tree was vibrating with honeybees. It was the perfect complement to the 70 plus degree day.

Honeybees are one of the coolest creatures, in my opinion. They are not native to North America. They arrived in the 17th Century when European colonizers brought managed hives along for honey and beeswax. Some of the bees escaped and formed wild colonies. Before the bees' arrival, flies and beetles were the primary pollinators on the continent.

The bees have had a rough go in recent decades, unfortunately. In 2020, NPR's Short Wave featured an interview with Dr. Sammy Ramsey, aka "Dr. Buggs," a honeybee researcher with the US Department of Agriculture. During the talk, Dr. Ramsey estimated that the US lost 40% of its honeybee colonies to colony collapse disorder in 2019. Hives that were healthy and active suddenly disappeared, leaving scientists puzzled.

Honeybees are still struggling with the "Three P's," as Dr. Ramsey put it. Parasites, pesticides, and poor nutrition.

First, a variety of parasites impact the bee population. One of the worst is a mite that sounds like a comic book villain: Varroa destructor. The mites wedge themselves between the exoskeletal plates (the bee's skin, more or less), where it releases a concoction of digestive enzymes before slurping up what Dr. Ramsey called "bee soup." It's as brutal as it sounds and can be devastating to entire colonies.

Pesticides have also played a significant role in the decline of the bee. Many pesticides are systemic: Once they are absorbed by the seed, the chemical will end up in different parts of the plant before making its way out through the pollen. When bees bring the pollen back to the hive, the pesticides will spread throughout the colony as different bees perform their respective jobs.

Consumer-grade herbicides often have insecti mixed in for preventative measures. So, say you spray the dandelions in your yard with everyday RoundUp. Dandelions are a literal bee magnet: Your neighborhood bees may stop by your dandelions before heading over to the nearby pea field, which has been treated with a commercial insecticide. Dr. Ramsey said that while each chemical may have been used responsibly by the individual applicator, the damage happens when a bee picks up multiple chemicals. As many as 14 different chemicals have been detected in a single colony, with Ramsey explaining that three to four chemicals are not uncommon in a single hive.

The final "P:" Poor nutrition for the bee is due to a combination of scarcity and lack of plant diversity. Honeybees visit tons of flowers, where they forage nectar and collect pollen which is taken back to the hive. The nectar gets regurgitated into the hive's cells, eventually turning into honey, and the pollen is stored to feed the colony. If the bees cannot access flowers or enough diversity of flowers, they will starve to death.

According to Dr. Ramsey, starvation is not the only issue with nutrition, but they also require a diverse diet, similar to the concept of a well-rounded human diet.

"A person who eats only French fries is not starving, but they don't have the full complement of nutrition that they need in order to be healthy," Ramsey explained.

Now, if you're anything like me, you are chomping at the bit to get petunias and other brightly colored flowers into their boxes. This year, I'm planning my flowers to help my neighborhood bees. Here are some of my favorites, including some cold-hardy, early blooming options for an early-bird pollinator treat.

For reference, Waitsburg is in USDA Plant Hardiness Zone 7b.

Black-eyed Susans do well in our area, as they are hardy, drought-resistant perennials that often grow in mountain meadows. The bright yellow flowers are a target for bees, butterflies, and hummingbirds. These easy-going plants bloom from June through August and do best in sun or partial shade.

Echinacea, or coneflowers, benefit everyone around them. Bees love the stiff, dry flowers, and the plants are deer-resistant. If you grow echinacea, let them be until winter, and the songbirds will flock to pick up the leftover seeds. Coneflowers bloom from June through October and love growing in sunny areas.

One of my personal favorites is the pansy. Cute as a button and known for their colorful faces, pansies are super easy to grow and thrive in both containers and directly in the ground. Pansies tend to do best in cooler areas of the yard that receive partial sun. They begin blooming in April and don't stop until October.

Herbs of all varieties are bee-friendly. I, personally, have an oregano plant and various mint plants that are left to their own devices and attract hundreds of bees a day. Both mint and oregano are easy to grow, and mine live in full sun. Vegetable plants, like tomatoes and zucchini, and flowering fruits like apples are a bee favorite, as well, and are likely on your to-plant list.

I will always suggest sunflowers, too. They are easy to grow, gorgeous, and come in all shapes and sizes. One of our contributors gifted me some of her seeds for giant sunflowers for Christmas, and I have become giddy watching these mammoths come to life. Sunflowers are late to bloom, typically in August, but they are so worth it. They require as much sun as that big ol' ball of gas can provide.

Bees are pretty lucky in an area like ours, where it seems even the most beginner of gardeners have green thumbs. Flowers are abundant, and the bees will appreciate a boost of power pollinators!