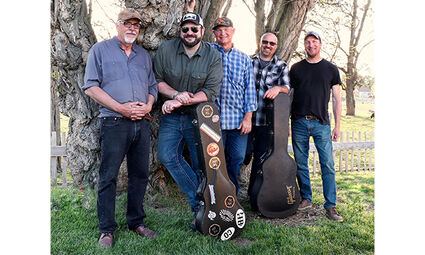 It's been a while since many of us have heard from the Frog Hollow Band, a local music group composed of five men from Walla Walla and Waitsburg who are friends to many of us. Knowing how frustrating it has been to be a performer without gigs during the last year, I called up my friend Brian Richards, drummer for Frog Hollow, to check in with the local Alternative Country-Rock group whose music we've enjoyed for years.

"We're still here!" Richards said. He says the group has been collecting regularly in Waitsburg for rehearsals since taking a little time off when the pandemic shutdown first began in March 2020.

"We laid low for a bit, then started getting together carefully," Richards said.

The band is composed of Richards on drums, bass player Jim Pearson, Ty Lane is on guitar and vocals, on acoustic guitar is Kit Lane, and Jerry Yokel is still on the fiddle, or mandolin, or "whatever he does," said Richards.

The group has spent the last year tossing around new ideas for music to work on, as well as keeping up the standing repertoire.

"We're priming ourselves for when things do open up," said Richards. "We've turned down a lot of requests for public events coming out of Oregon. We've been sort of on the conservative side of wanting to stay safe for ourselves and our families."

However, the group has kept up the annual Kat Kelly Memorial event, held each summer at Kelly's Restaurant in Milton-Freewater in celebration of the late Katherine "Kat" Kelly, founder of that popular regional eatery. The event raises money each year in support of local hospice care. This year's event is scheduled to take place on August 11. It will be the 9th year of the celebration. All in all, the group only did four gigs last year, so they are anxious to be out on the road again.

Richards says there is also a possibility of playing at GESA Powerhouse Theater in Walla Walla as part of GESA's Summer Stage arts festival held each summer. The event was canceled in 2020 due to the pandemic.

"Safety has been important to us," says Richards, "but we're definitely tired of the shutdown. As things start opening up again for performances, we'll be ready!"