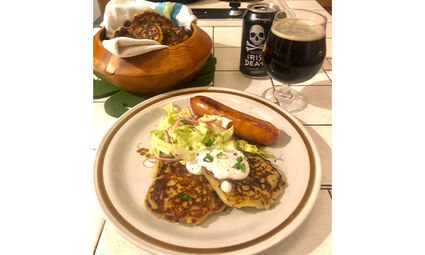 My love for sampling the diversity of foods from around the globe is likely rooted in my multi-cultural background. As my last name implies, the ancestry from my father's family is Mexican, while on my mother's side its mostly all Irish and English. Wherein the food culture of Mexico is most strongly symbolized by corn, Ireland has the potato, ironically also a New World crop. There is much debate about who brought the first potatoes to Ireland and when, however, no one can deny the impact they have had on the Irish. In the late 17th century, potatoes were quickly embraced for being a high-yielding staple crop, even in the rocky and mostly poor soil of Ireland. Over a hundred and fifty years later, potatoes had become the single monoculture crop across the island, which unknowingly paved the way for disaster when a parasitic blight crossed the Atlantic. The resulting Great Potato Famine killed a million people between 1845 and 1852 and led to millions more fleeing Ireland and settling elsewhere, many in North America.

Today, the potato is again an item of culinary pride to the Irish, with countless regional dishes showcasing the versatility of the humble tuber. Boxty, made from both mashed and grated potatoes, are savory pancakes with a soft chew and crisp exterior. Popular on pub menus across Ireland, particularly in the north, they are also an easy recipe for home cooks everywhere. These little delights will make a welcomed addition to your Saint Patrick's Day feast.

Peel half the potatoes and cut into a 1-inch dice. Add diced potatoes to a medium saucepan of salted water and bring to a boil over high heat. Cook until tender for about 15 minutes.

While the potatoes boil, peel the remaining potatoes and coarsely grate with a box grater. Place the grated potatoes in a clean kitchen towel, or layers of cheesecloth, and season with 2 teaspoons of salt and a teaspoon of black pepper. Twist towel closed and squeeze out excess moisture over a sink. Set aside.

When boiled potatoes are soft, drain and transfer to a large bowl. Using a masher or ricer, mash the potatoes until creamy. Add the grated potatoes and the buttermilk and stir until just combined. Next, add the flour, baking soda and green onions. Mix together, making a thick smooth batter. Check seasoning, add more salt and pepper to taste.

Heat the oil and 2 tablespoons of the butter in a cast iron, or heavy-bottomed non-stick skillet, over medium heat. Working in batches of 3 to 4, scoop ⅓ cup of batter into the pan, making 3-inch-wide pancakes. Cook until golden brown on both sides, about 4 to 5 minutes per side. Lower temperature if the pan gets too hot and pancakes brown too fast. Don't let them burn. Continue with the rest of batter, adding more butter to the skillet as you go, as needed. Keep cooked boxty warm on a baking sheet in a 200-degree oven as you work.

Boxty makes a great side dish for hearty meat dishes, such as beef barley stew and braised lamb, or skip the mash and serve them with bangers (sausages). I served them beside pan-seared sausages, and horseradish cream, with a simple cabbage salad.

They are wonderful as a breakfast treat with bacon, eggs, and grilled tomato. Or whip up some hollandaise and use boxty in lieu of English muffins for an Irish take on eggs benedict.

As they are surrounded by the ocean, the Irish consume a lot of seafood. Try boxty alongside grilled fish, or a hearty seafood chowder. Also, a dollop of sour cream with some smoked salmon or caviar could turn mini (half dollar-sized) boxty into an elegant hors d'oeuvre.