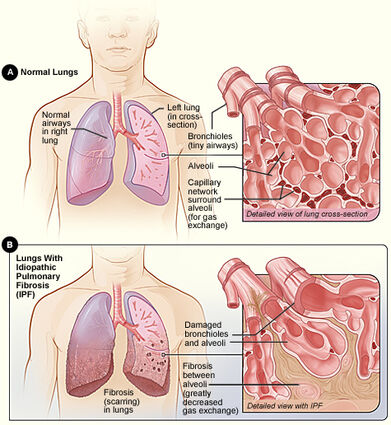 According to data provided by the US National Library of Medicine and the National Institutes of Health, agricultural workers are at a greater risk of respiratory problems due to exposure to chemicals, dust, and naturally-occurring materials like crystalline silica.

A multicenter case-control study in 2000 found evidence of interstitial lung disease, like pulmonary fibrosis, to farm and livestock workers. In 2006, a study found approximately 32% of ag-workers had pneumoconiosis (any lung disease caused by the inhalation of organic or nonorganic airborne dust and fibers), compared to roughly 19% of non-ag workers in California.

According to Johns Hopkins Medicine and the American Lung Association, symptoms of pneumoconiosis include:

Symptoms of pneumoconiosis are usually aggravated by strenuous activity, but may become present during periods of rest as the disease progresses. If the scarring is severe, oxygen may not be able to reach the bloodstream easily, resulting in low blood oxygen levels, putting stress on other organs such as the heart and brains, which can result in additional symptoms.

There are no tests that specifically diagnose pneumoconiosis. Your doctor will perform a physical examination, focusing on the chest area. Chest x rays, pulmonary function (breathing) tests, and/or CT scans may be used for diagnosis. A detailed histology will be necessary, so be prepared to answer questions about possible exposures, timelines, and your work history. Clinicians will ask about exposures to mold and dust.

According to Harvard Health Publishing, Pneumoconiosis causes permanent lung changes, but can almost always be prevented. Limit work-related exposure to mineral dusts by using approved safety measures, such as protective equipment and clothing. Protective equipment must fit properly and be used according to the manufacturer’s directions.