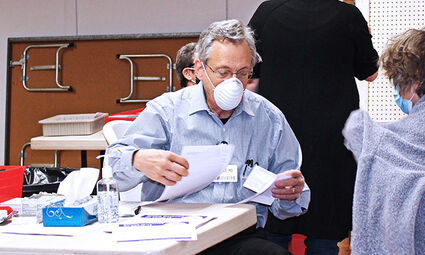 Dr. Michael Luce worked as a vaccinator at last week's COVID-19 vaccination clinic at the Columbia County fairgrounds. The clinics took place over three days, instead of two, mainly to catch up on administering second doses of the Moderna vaccine. The week of March 1 was limited to one clinic held Tuesday.

DAYTON-Although initial COVID-19 vaccination efforts have been uneven, incremental progress is being made, CCHS CEO Shane McGuire told the Hospital District Board of Commissioners at their meeting last week.

"A lot of the story still remains about supply," he said.

McGuire said inventory of the vaccine was initially managed to cover first and second doses. After the governor issued an edict requiring 95% of the vaccine should be used each week, vaccines reserved for second doses were used as first doses by the district.

"Then we ended up in a situation where we didn't have second doses," he...