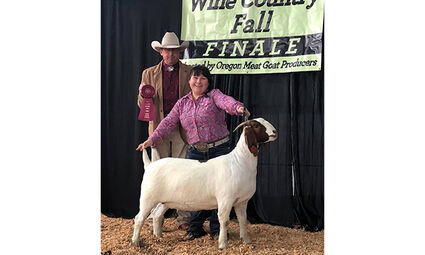 Coulston is the owner/operator of a Boer goat breeding program, but her animals serve an extra special purpose in her life. They double as therapy, with Coulston saying they never judge her if she doesn't get something right the first try.

Grace Coulston, of Waitsburg, is vivacious, known for her constant smile, and never hesitating to lend a helping hand.

Her entire life, she has been active. She grew up on a farm just outside of Waitsburg and loves all-things agriculture. Less than one year out of high school, Coulston is the owner-operator of a successful Boer goat breeding program, Sorghum Hollow Boer Goats, which takes her all over the country for shows and sales.

February is a special month for Coulston: It is Turner Syndrome Awareness Month.

Turner syndrome (TS), also called 45, X, and Ullrich Turner syndrome is a rare chromosomal disorder in which a female has an incomplete or is missing an X chromosome. The condition affects one in 2,500 live female births, affects all races and backgrounds, and has a long list of complications, including short stature, lymphedema (swelling of hands and feet), bicuspid aortic valve, and horseshoe kidneys.

According to an article written by Krissi Danielsson, MD, in 2013, 99% of TS pregnancies result in miscarriage or stillbirth, and as many as 15% of all miscarriages have the 45, X karyotype.

Coulston lives with TS and recently became an awareness advocate with the Turner Syndrome Global Alliance (TSGA), though she says she has been an independent advocate throughout her life. Incorporated in 2014, TSGA works to have TS included in genetic research so the disorder can be better understood. In 2014, TSGA was granted 501c3 and later 509(a)(2) non-profit status, making it a public charity.

"Not many studies have been conducted," Coulston said. "The last study that I'm aware of was in Boston five years ago. A lot of babies that have (TS) won't survive out of the womb."

Growing up, Coulston said she had appointments every three months or so at Seattle Children's Hospital, where she saw Dr. Patricia Fechner. It was Dr. Fechner who suggested that Coulston explore TSGA. Coulston has since joined a separate Facebook group where she has connected with women worldwide living with TS.

"It's nice to see that other people have the same problems that I do, and it's been so interesting to see just how diverse TS is," Coulston shared. "It's not a cut and dry disorder- it is very complex."

Coulston says that the most apparent symptom of her TS is her height.

"I'm lucky to have grown up in Waitsburg, in our community. I was never thought to be different, but it was pretty obvious, especially in high school, because I was always the short one. Getting to my top locker was very fun," she said, laughing, referencing the upper lockers reserved for juniors and seniors at Waitsburg High School. "The teachers and other students helped me out as much as possible, but I was always having to get tall people involved."

She has combated the height struggle in the best way possible: With laughter.

"I've heard just about every short joke in the book. It's hilarious," Coulston shared. "If you don't laugh about it, you're never going to get to move on."

Coulston also has a horseshoe kidney, a condition where the kidneys fuse at the base forming the "U" shape or horseshoe. There are complications from the kidney condition, but she has figured out how to do "dangerous activities" safely, like cheerleading and horseback riding. She said that she is always as careful as possible, but she doesn't let it hold her back from enjoying life.

Her goat program is a direct result of TS, said Coulston. The animals serve a dual-purpose, business and, more importantly, her therapy.

"They have helped so much. Most girls with Turners don't get social cues, but animals communicate really well, and they don't judge you when you don't get it right," Coulston shared. "They are good test dummies to learn how to not verbally communicate with things."

Like pink ribbons for breast cancer and blue ribbons for diabetes, TS has a purple butterfly as their symbol of awareness. Coulston thinks this is just the cutest.

For information on Turner Syndrome, or to donate to research efforts, visit http://www.TSGAlliance.org.