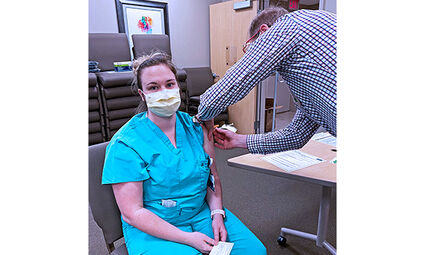 RN Heidi Ely has received both doses of the Pfizer COVID-19 Vaccine, and said it has given her a renewed sense of optimism.

WAITSBURG-Registered Nurse Heidi Ely, of Waitsburg, has recently completed both rounds of the Pfizer COVID-19 vaccine. She said that it had given her a renewed sense of hope, and she hopes that her story as a nurse, and a mother, will ease minds.

Over the past year, Ely, who works in Providence St. Mary's Same Day Surgery department, has seen the effects of the COVID-19 virus firsthand. She watched as the medical facility needed to change protocols, often by the hour, and how the staff adapted to the changes. She stood side by side with coworkers who battled exhaustion and fatigue, covering shifts for those who fell ill or who were unable to work with infected patients.

She has seen people suffering from Post-COVID Syndrome, which causes various symptoms, including fatigue, muscle loss, difficulty sleeping, hair loss, and difficulties with taste and smell. According to the Infectious Diseases Society of America, a study of residents in Huang, China found that 76% of all study participants displayed at least one of the above symptoms.

Still, Ely said, initially, she had reservations about taking the vaccine, citing the relatively quick approval of the current vaccines and the fact that she is a new mom.

"I am all for vaccines; I think everyone should be vaccinated," Ely said. "But something so new, that was absolutely terrifying to me. I didn't want to be a guinea pig."

She spoke with an array of doctors, anesthesiologists, and other healthcare professionals before deciding on whether she would take the vaccine. She spent hours researching information from the American Academy of Pediatrics (AAP), as she has an 11-month-old baby that is still nursing.

Although there is no data yet on the safety of the current COVID-19 vaccines in lactating women, breastfed infants, or milk production/excretion, the CDC states that Messenger RNA (mRNA) vaccines, like the COVID-19 vaccine, are not thought to be a danger to lactating individuals or nursing babies.

"I even called our pediatrician and my OBGYN, and they both said, 'even though you are breastfeeding, go for it'!" Ely shared. "I signed up for it right away, after that."

Her biggest concern regarding the possible effects on her baby is simply the hope that some of the antibodies have passed on to her daughter.

According to the CDC, there have been more than two million pediatric cases and more than 200 pediatric deaths. Still, experts believe that the case counts are lower than the real number because pediatric patients often present only mild symptoms.

Ely's baby was born last March, and she said that her family 'hardly went anywhere' to keep the baby as safe as possible.

"That was really hard on my mental health," Ely shared. "I really hope that I can share some of the protection with her, so we can get out and enjoy the small-town life that I love so much. I didn't move back to stay at home; I want to get back to parades and eating lunch with friends, and sharing that with my baby."

The first dose was almost unnoticeable, Ely said. Her arm was sore for a little bit, but she said it was no more painful than any other vaccine she had ever received.

"It was a little bit annoying, but, I mean, which shot out there doesn't give you a sore arm," she said. "You are getting a needle pushed into your muscle."

A little over two weeks later, she was eligible for round two. The second dose was a little more eventful, resulting in mild symptoms that lasted 18 hours. She likely wouldn't have experienced these symptoms had she followed all the pre-vaccination advice, said Ely.

"It was recommended to pre-medicate with Tylenol or ibuprofen around the clock. They recommended taking Tamiflu to give an immune system boost. But I didn't do any of that, and I ended up hanging out in bed for a bit," she shared. "Now, though, I am feeling great, hoping the vaccine does its job, and we can keep getting the vaccine allotments and getting the shots out to the community."

She said that she highly recommends following your doctor's advice before and after vaccination.

"I know there is a lot of pushback because it is a new vaccine; people are scared of it. But someone always had to get the vaccine first," Ely said. "How are you going to eradicate something if we aren't willing to take the first steps?"

Ely was raised in Waitsburg and moved back from Walla Walla in 2020. She said she received a lot of flak from friends when she posted her COVID-19 vaccination card on her social media. One of the frustrating things she has experienced, both before and after making the post, is the 'it's just a mild cold' mindset.

"This is a very serious thing. If you get sick, you may only have mild cold symptoms, but we don't know what the lifelong effects are; COVID-19 has only been around for a year."

Ely said that getting the vaccine was something she wanted to do to protect everyone around her, regardless of their political views, vaccine views, or opinions on the disease.

Being vaccinated has given Ely a needed boost of optimism.

"I feel like the vaccine is going to be very effective in helping push back against the disease," she said. "Every vaccine has side effects- everything you do has side effects. Does the potential for side effects really outweigh the want for taking our masks off and throwing them away, having playdates for our kids, or simply having a glass of wine with friends? Does the fear really outweigh the want to go back to normal? COVID-19 may be mild for some, but it is deadly for many. We are all in this together."