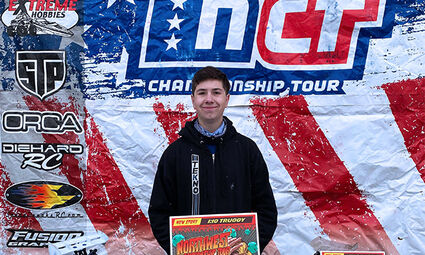 Harris with just a few of the awards he won while racing on the Northwest Championship Tour in 2020.

WAITSBURG-Waitsburg's favorite remote-control car racer has signed yet another racing contract as he heads into his third year on the track.

Koby Harris, a senior at Waitsburg High School, signed a progressive deal with Tekno RC, an RC car parts company known throughout the industry for its proven car body styles and parts. A progressive deal means that as Harris' racing career continues to excel, he will be offered better promotional deals as long as he wishes to represent the company. Last year,...