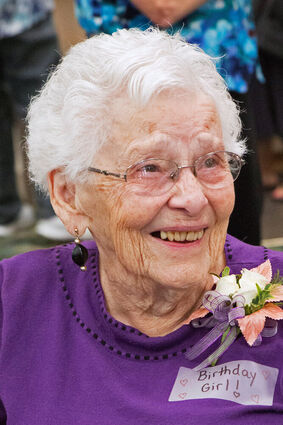 Verla Ernestine Rouse, age 102, passed away peacefully at home in Dayton, Washington on December 10, 2020. She was born on October 17, 1918 on Angel Ridge out of Peck, Idaho, the youngest of five children born to George Oren Stevens and Julia Matilda Johnson. She graduated from high school in Kooskia, Idaho in 1939 and attended beauty school in Waterloo, Iowa.

In 1949, Ed and Verla purchased the City Cleaners dry cleaning business on Main Street in Dayton, Washington. They expanded the business to include clothing alterations and installed the coin-operated laundromat next door. Verla was a very talented seamstress and a sewing 4-H leader. Ed and she enfolded a local teen, Vicki Tewalt (Eslick), into their family in 1959. Verla was a member of Eastern Star and the Dayton Methodist Church. She turned her life fully over to her Lord and Savior Jesus Christ in 1967.

After Ed suffered a debilitating stroke in 1975, they sold the cleaning business and moved to Prosser, Washington where Verla worked at a clothing store owned by her cousin, Jerry Johnson. Ed's declining health and other circumstances precipitated a move to Pasco, Washington in 1984. Ed passed away in March 1985. Verla worked in the alterations department of the Bon Marche in Kennewick for several years after that.

Verla was known to all as an exceedingly kind, generous and loving woman. She was very active in her church - volunteering to serve wherever and whenever she was needed. Verla enjoyed travelling and was always up for an adventure. She toured the Holy Lands in 1990 and participated in a mission trip to Sucre, Bolivia in 2000. She enjoyed riding the Amtrak train between Pasco and North Dakota to visit her son and his family. Verla was always very stylish and physically fit - participating in aerobic exercise classes well into her 80s.

Verla moved back to Dayton in 2011 to be closer to her daughter's family and enjoyed meeting new friends in the Eagle Manor apartment complex. She lived with her daughter and son-in-law from 2017 until her death.