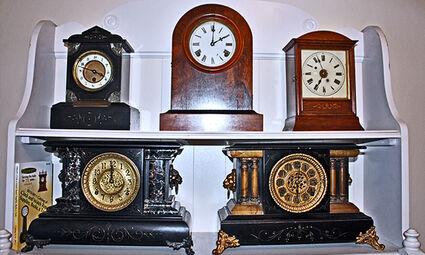 The clock Petersen received on his fifteenth birthday is on the lower shelf on the left, his father's flat-top clock is next to it on the right.

Before visiting Greg Petersen at his Dayton home, I'd not heard the term "Antiquarian Horologist." But that's what's on his calling card. Horology - from the Greek "hora," meaning time - is the study and measurement of just that. Greg is a man who keeps the measure of time on antique mechanical clocks. Entering his home was like stepping back in time.

Looking around in awe, I asked Petersen how many clocks he had.

They are all in perfect running condition. Not all are ticking, however. Keeping all Peterson's timepieces running would be onerous, so he keeps ten running at a time.

One of the clocks hanging in his dining room is a 19th-century French wall "repeater," because it tolls the hour twice. It's an impressive timepiece, with a beautifully resonant chime. According to Petersen, the first toll officially announced preparation for prayer time, and the repeated toll indicated that prayer time had begun.

"I think the real reason was so that the first toll would wake you up, and the second one would tell you what time it was. Makes sense to me, a guy who likes hitting the snooze button," said Peterson.

When he was five years old, Petersen started his path to becoming a horologist by tearing apart his parents' alarm clock. That must have been fun. In 1963, his father gave him a classic flat-top mantel clock for his fifteenth birthday and showed his son all he knew. But that wasn't his original inspiration.

The year he turned four, his babysitter gave him a children's book for his birthday. He brought it out to show me. It appeared to be in near-perfect condition. Originally published in 1945 by Margaret Wise Brown, "The Little Fur Family" tells the tale of a young bear enjoying a day in the woods with his family. As we thumbed through it together, looking at the illustrations, we came to one showing a grandfather clock.

"I remember looking at that clock again and again," he said. "I really believe that's where my first interest in clocks began."

Over the years, Petersen has worked on hundreds of clocks. Among the more notable is the courtroom calendar clock at the Walla Walla Courthouse, which he worked on with one other person. He also serviced the antique clock that still graces the Columbia County Auditor's office, originally placed there when the courthouse was completed in 1875.

"I still have to pay my taxes, though," he said, tongue-in-cheek.

I was most impressed with two clocks displayed on the second floor of Petersen's home. One was his father's flat-top mantle clock, and next to it, the very mantle clock his father gave him in 1963, both in perfect condition.

"Clocks were once an important part of the household," he said. "With all the digital devices we have now, we just don't need mechanical clocks like we once did. They're obsolete."

Petersen's neat and busy-looking basement workshop suggests otherwise. He has half a dozen clocks waiting to be worked on. He can spend anywhere from two to sixteen hours on a clock, depending on its condition.

"A lot of them just need a good cleaning. People don't realize their clocks need oiling and cleaning. Would you go for years without putting oil in your car?" he asked.

He sources replacement parts from the only three companies still operating in the United States. Someday, he said, those will disappear, too.

Obsolete or not, people keep bringing clocks for repair, heirlooms or collectibles, as if Petersen were the clock doctor. Our Black Forest cuckoo is now one of them. If you have a timepiece you'd like him to look at, you can call him at (509) 386-8787 or send an email to petersen19472@gmail.com

And if you consider taking one apart, keep in mind that marking the intricate pieces before disassembling is key to getting it back together again.

"Just don't bring me a clock in pieces in a box," he said with a grin.

Whether or not you own an antique timepiece, I think many readers will agree: the romantic appeal of an old clock chiming the hour will never be obsolete.