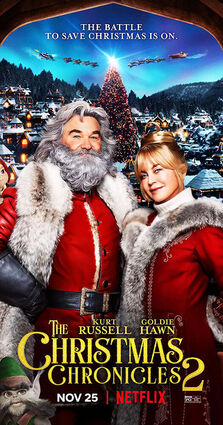 Kurt Russell and Goldie Hawn are back in another North Pole adventure. This time, true believer Kate (Darby Camp), rebelling against her mother's new boyfriend, runs away to the North Pole but is followed by exiled elf, Belsnickel (Julian Dennison). This film is fun and also brings up some good points about the naming of Santa's village. Will the name change permanently in favor of Mrs. Claus or the elves who built it? That may be a tale for another Christmas.

Klaus is an Academy Award-nominated film starring Hollywood heavyweights Jason Schwartzman, J.K. Simmons, Rashida Jones, Will Sasso, Neda Margrethe Labba, Sergio Pablos, Norm Macdonald, and Joan Cusack. It's rated for rude humor and mild action, so clearly is a good time. In it, a selfish postman and a reclusive toymaker form an unlikely friendship, delivering joy to a cold, dark town that needs it. Together, a postman and a teacher prove that their civic duties provide the basis for an entire town's civility. Can you put a stamp on a community? Only with a little luck.

This R-rated darkly comic Christmas horror is set in an archeological dig in northern Finland and begins on Christmas Eve. The crew finds a mysterious and sacred grave encased in sawdust. In this town, there are no illusions about gifts and cookies. Santa is a punisher of naughty kids, as evidenced by their historical texts with depictions of a beastly Santa over a cauldron. And that's not soup in there.

A holiday rom-com, or perhaps dram-com, about being true to oneself and trying not to ruin Christmas. A longtime lesbian couple Abby (Kristen Stewart) and Harper (Mackenzie Davis), visit Harper's family for the holidays. What Abby thought was a well-established reality in Harper's parents' eyes was a figment of one's imagination. Harper is still in the closet. Now, under the guise of friends, the couple must undergo Harper's mother's attempts at matchmaking. But it's just five days, right?! Fans of the Canadian sitcom Schitt's Creek will recognize Dan Levy, who has unofficially revised elements of his now-iconic character, David.