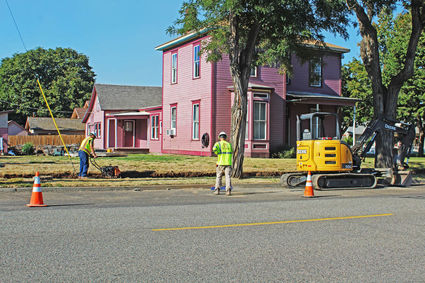 DAYTON-Trina Cole, Administrator for the City of Dayton, told attendees at the city council meeting last week about plans for city and county representatives to enter into mediation over the terms of the Interlocal Agreement for Law Enforcement, Dispatch Services, and Court Services, the County provides to the City.

County Commissioner Ryan Rundell, who was at the meeting, said a location had been identified and the date is set for Nov. 5.

During the council meeting concerning an application to the state Dept. of Commerce for the City to receive a State Community Development Block Grant (CDBG), a public hearing took place to help low to moderate-income households mitigate the impacts of COVID-19. The funds can help with utilities or mortgage and rent payments, and it can help small enterprises.

By partnering the City, the County, and the Town of Starbuck will receive a share of $27,613.00. The Finance Committee will meet to discuss the application this week.

Misty Yost said the Dayton Chamber of Commerce is planning for three events this fall.

Tickets are available at the Dayton Chamber of Commerce website for the Nov. 6 Brix and Brew Home Edition fundraiser.

Halloween Trick or Treat will be a drive-through event this year. It will be held Saturday, Oct. 31, in the parking lot behind Dingle's of Dayton, from 3-5 p.m. The Dayton Chamber of Commerce is accepting donations of candy for the event. Donated treats can be dropped off at the Chamber office at 166 East Main Street. Pick-up by Chamber staff can also be arranged by calling (509) 382-4825 or emailing Chamber@historicdayton.com.

Christmas Kickoff has been renamed Believe! A Small-Town Celebration and will be a month-long event this year. Yost said the idea is to spread activities out over a longer period to help with crowd control.

Cole reported for the Public Works Department. She said the City had contracted with the County for woody debris removal from the Touchet River, and the work is in the final stages.

She said the contractor for the US Army Corps of Engineers has mobilized, and work is beginning on levee rehabilitation. Work will start at the south end of town and finish on the north end of town by Dec. 31.

Cole said staff at City Hall have been working to finalize the essential element portion of FEMA funding. A final damage inventory should be complete by Oct. 30.

The first round of union negotiations begins on Oct. 20, she said.

The City, Anderson Perry & Associates, Washington Water Trust, the Confederate Tribes of the Umatilla Indian Reservation, and the regional Department of Ecology in Spokane are waiting for approval of the plan to construct a flood-plain-by design type of Wastewater Treatment Plant. They are hoping to hear from the Washington State Department of Ecology, in Olympia, within the next six weeks.

No. 1967, amending portions of Title 11 of the Dayton Municipal Code, and adopted revised regulations of the Zoning Ordinance. Planning Director Meagan Hayes said the intent of the ordinance is to offer increased compliance with the Comprehensive Plan; to achieve the overarching goals, remove additional barriers, and promote and allow for intelligent and affordable growth in the City of Dayton.

No. 1969, amending the 2020 budget to reflect increased revenues and expenditures associated with the 2020 Bond Refunding Project.

The Council also considered and authorized the following Resolutions:

No. 1440, authorizing an interfund loan for the South Third Street Sidewalk Replacement project as provided in the 2020 Budget adopted Dec. 4, 2019.

No. 1442, amending the Interlocal Agreement with the Port of Columbia to include Cares Relief Funding grant increased funding and CDBG grant administration for the increased funds.

No. 1443, approving the Docket list for the 2020 Comprehensive Plan Update in accordance with the Washington State Growth Management Act. Meagan Hayes said the Planning Commission received two Dockets; one from the City staff requesting the adoption of the Urban Forestry Management Plan (Main Street Tree Plan), by reference. Hayes also submitted a request to the Planning Commission to update the zoning map. She said no zoning changes have been made and that this was done to provide clarity.

"All we did was clean up the boundary lines," she said.

No. 1444, authorizing the agreement for Geotechnical Information Systems (GIS) services with Anderson Perry & Associates, Inc. and authorizing the Mayor to execute said agreement. Hayes said the GIS consists of a compilation of various layers, or data sets, which could include zoning maps, water and sewer mains, or parcel boundaries.

"It's every map we could possibly use in one location," she said.

The maps are available to the public on the city website under Map Services and GIS.