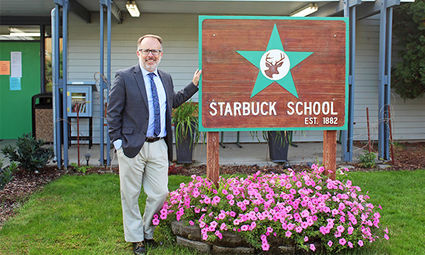 STARBUCK-Gerry Grubbs has been hired by the Starbuck School District as the next superintendent to take over for retiring superintendent Kevin Graffis.

What does he think of Starbuck?

"It is a beautiful little town and school," he said.

Grubbs said the Starbuck school feels like school must have been one hundred years ago.

He likes the multi-age classrooms. He said what the school lacks in supplemental resources; it makes up for with a smaller number of students and more personalized teaching.

Grubbs said he was captivated by the quality of the light on the rolling hills, and the small-town charm of Walla Walla, and the villages on the Palouse when passing through to visit a daughter who was attending W.S.U.

"This is America. This is amazing. I love it here," he said.

Grubbs has a varied background in education administration, but he only recently began working toward getting his superintendent credentials.

When he left Tumwater, Grubbs worked half time as an elementary school vice-principal for the Rochester School District. The other half of his time was spent working at Maple Lane, a detention facility near Rochester, Wash.

During the Gulf War, Grubbs was a full-time vice-principal with the Clover Park School District, on the Fort Lewis Air Force base.

For the next seven years, he held several administrative positions at the Washington Virtual Academy, including the role of principal.

Then he spent six years with the Open Doors Program, a five-county program, in the Capitol Region, helping kids who dropped out of school to reengage with school.

"We helped thousands of kids get back in school and get a new direction. It was a really neat program, but COVID hit it kind of hard," he said.

Around that time, Grubbs said his wife, Nikki, a superintendent in the Hood Canal School District, encouraged him to get into the Washington State University's Field-based Superintendent Certification Program.

He applied, was accepted, and he is now both a student and a part-time superintendent.

"I get to be doing learning while doing the work," he said.

Grubbs said he is grateful for his mentors: Kurt Hillyard a superintendent at the Grapeview School District, and Kevin Graffis, who is helping him transition to the Starbuck School.

Grubbs' contract with the Starbuck School District is for one day a week.

Grubbs, his wife, and two of his six children live in Olympia. He said he leaves his home around 9:30 in the morning on Wednesday, spends the night, and returns home on Thursday. On the week of the Starbuck School District Board meetings he will come to Starbuck on Thursday and return to Olympia on Friday in order to attend the meetings, which are on Thursday night. He checks in with the school by email, and by phone, on the days he is not in Starbuck.