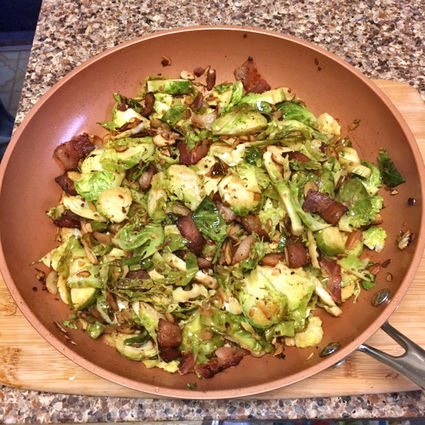 I almost put in a recipe for Apple Fritter Bread but wanted to make it first! For those who love Brussels sprouts, this will give you something new to do with them, those who don’t (thinking of Bill), will have to pass on it.

I had the slivered almonds in the freezer as well as the bacon. I had to send Joe to the store to get Brussels sprouts (by the way, Brussels does have an s at the end. 

Salt and pepper to taste

Fry bacon in a large deep skillet over medium heat until browned and crisp, 5 to 10 minutes. Remove bacon with a slotted spoon and set aside on paper towels.

Add the garlic and almonds to the fat in the skillet and cook briefly over medium heat until toasted. Add the Brussels sprouts and quickly toss to coat with the hot oil. Sprinkle the red wine vinegar over the sprouts and toss again to coat. Cook, stirring frequently until sprouts are wilted. Remove from the heat, stir in the bacon and season to taste with salt and pepper.

The time consuming part is the sprouts, cleaning and slicing. I have no idea what 4 pounds of sprouts looks like, so we filled a container that looked about right for dinner. Same with the bacon. It was frozen so I cut about a 1/3 and used it. I was concerned when they said to use the bacon fat in the pan, which was maybe about 3 tablespoons, but it got all absorbed with no greasy after taste.

After I tossed them with the cooked garlic and almonds, I added a bit of water, put a lid on, and steamed them. Then I checked and repeated to help make them soft.

It was very good and very appealing to the eye. We made angel hair pasta with shrimp to go with it, and I had made an apple crisp for dessert.