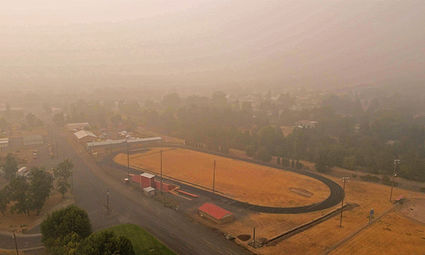 The City of Dayton, including the Dayton School District athletic field, slowly disappeared under a heavy blanket of haze last Friday. Smoke from dozens of wildfires across the Northwest continues to impact the Walla Walla and Touchet Valleys' air quality,an air quality advisory was extended through Friday, September 18.

A supermassive cloud of smoke blanketed parts of the Pacific Northwest over the weekend, leaving many areas in the 'hazardous' air quality range. Fires are still raging across Washington, Oregon, and California, creating a plume that meteorologists expect to hang around for a while.

The fire season has been fueled by an unusually dry, hot summer, with the last measurable rain dating back to July, which measured less than a tenth of an inch in Dayton.

More than a dozen fires still burn across Eastern Washington as of...