How Many Candles Go On The Cake (in dog years?) 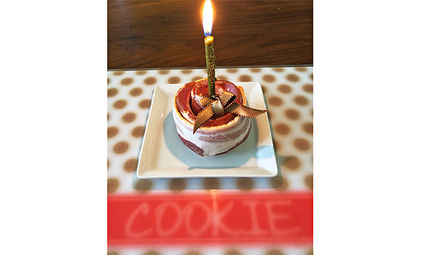 In about a week, on August 27th, Cookie will turn ten years old. I remember when I celebrated my tenth birthday, my main gift request – the thing I wanted most in the world—was a baseball glove. I got my wish, but that didn’t seem quite right for Cookie, who doesn’t need a glove to catch a ball. She’s a natural-born center fielder.

A birthday doesn’t really mean much to a dog, but that is true of many humans as well, which has never stopped me from attaching special importance to birthdays, especially when they are not my own. Let’s face it – there’s far less emotional baggage when you are celebrating someone else’s birthday.

Dog birthdays bring up some of the same considerations. What would make the day special? What would be the perfect gift? Should there be a party or a more intimate family celebration? And what sort of cake should be served?

Chocolate cake is out, of course, as chocolate is bad for dogs. Cookie likes certain kinds of chips, crackers, crunchy/salty things. But it’s hard to imagine a cake made out of Lay’s finest, and let’s not even think about kibble flour.

Setting that aside for the moment, there’s an equally important question raised by Cookie’s impending birthday. How old really is a 10-year-old dog in human years? To put it bluntly, how far along the mortality curve is my dog?

For larger dogs, 10 would be pretty much the end of the line. For Cookie, who is not only small (just under 12 pounds) but also a mixed breed (terrier/poodle/chihuahua), the prognosis is better. Her regular medical checkups have all been positive, and much of the damage from her early childhood abuse has been corrected over the years.

On the face of it, she doesn’t look much different from her appearance at age two or three. She sleeps more and doesn’t have the stamina she used to have. But her balance, wind, reflexes, and ball-catching skills are as good as ever.

Many of us grew up believing that one dog year equals seven human years, which would make Cookie 70. That’s really old! But recently, there has been a revision to the way dog years are calculated. According to numerous experts, that old formula was based on a simple equivalency – the average dog lives to be 10, and the average human lives to be around 70. Fortunately for those of us reaching those numbers, there’s no such thing as average.

The latest research, done by a team at the University of California, San Diego, studied specific genetic markers for aging in 104 Labrador retrievers between four weeks and 16 years old and compared them to similar studies of 320 humans from age one to 103.

To summarize, puppies age far more quickly than human babies. Cookie had her first (and only) litter by the time she was one, which clearly wouldn’t equate to a seven-year-old human. How should you accurately gauge your dog’s age? Here is where theories differ.

The American Veterinary Medical Association says that for a medium-sized dog, the first year is equivalent to 15 years. At age two, the dog is about 24 (out of college and on their own!). After that, each year of a dog’s life is equivalent to five human years. By that standard, Cookie is 64. Maybe we should play “When I’m 64” at her birthday party.

Which brings us back to the cake question. These days, a common pastime among home bakers is to make cakes that look like something else. Google “cakes that look like everyday objects” and you’ll find pictures of cakes that look exactly like T-bone steak, all sorts of fruits and vegetables, pizza, a full carton of eggs, a can of Campbell’s tomato soup (thank you Andy Warhol), a roll of toilet paper, an old shoe or a cluster of billiard balls. So why not give Cookie a cake that looks exactly like a pound of bacon? Except I want to go it one better. It’s not really a cake. It really is a pound of bacon.

Seems to me that solves two problems at once, both cake and gift. Happy birthday, Cookie!