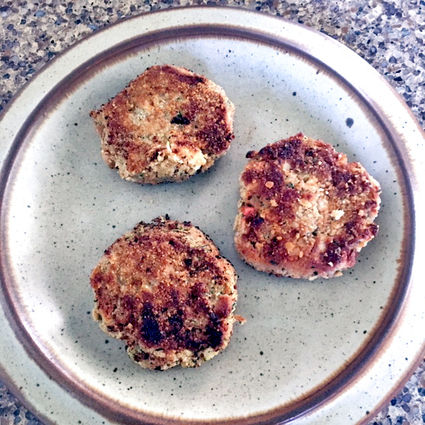 “These really taste like crab cakes but without the crab, and are a really good way to utilize that bumper crop,” says Patty Jo on All Recipes.com.

This recipe caught my attention for several reasons. My zucchini plant has decided to go into high gear, I have the Old Bay Seasoning, and I had a 1/3 package of “fake” crab in the refrigerator. Although the recipe doesn’t call for crab, as it’s supposed to be a kind that makes you think it has crab, but doesn’t, much like the “fake” apple pie, made with crackers, but it has all the seasonings one finds in an apple pie, but I had the fake crab to put into the fake crab cakes. 

This had over 1000 reviews. I encourage you to go to the site to read some. I try to so I can see what others have done. One review said they baked them in the oven, rather than frying them, at 400 degrees, 12-15 minutes on each side. All said to drain the zucchini. Some didn’t have the Old Bay Seasoning so substituted different seasonings.

I can see that this can be a flexible recipe. I chopped up some cheddar cheese, (a couple of tablespoons) and wished I had put more. I had thought of adding the grated Parmesan cheese (in a jar) and forgot.

I also doubled the recipe.

In a medium skillet, heat oil over medium-high heat until hot. Fry patties in oil until golden brown on both sides.

The recipe says bread crumbs, the direction says seasoned crumbs. One review said she used Italian bread crumbs, another used half & half, plain and seasoned because the Italian crumbs overpowered the Old Bay seasoning. I did the half and half.

I took a hand full of zucchini and squeezed out the juice, but not too tightly, as to leave some juice in it to absorb the bread crumbs. I continued with that method until I had squeezed it all.

I was surprised how easily they made into patties, first making a ball, then flattening to make a patty. I put them on a tray, covered in the refrigerator for a while (optional).

As I mentioned, I added chopped fake crab and cheese. I think next time I will add tuna fish and more cheese.

I did fry them which browned them nicely. I found using two spatulas worked better to flip them. In hindsight, I think I would have flipped them one more time, making sure they got very warm in the center. I put the cooked ones in a warm oven to keep warm.

**I also used bread crumbs to coat them rather than flour. One review said she thought it made them a bit more crunchy.