By Bill Rodgers
The Times

Out on a noodle 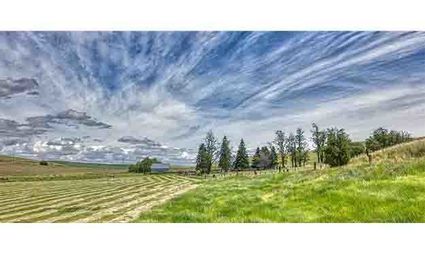 I needed to get out of town for a while last Saturday morning, so pointed my old RAV4 northward, with no particular place to go (thank you, Chuck Berry). My friend Leslie Cain called it "noodling," which is what I now call what Renny Russell (of On The Loose fame, Google it)) and Bill Wayne taught me to call "ramblin'" when I hung out with them during Spring Break in Penasco, New Mexico in 1969.

Either way, noodling or ramblin' around the gravel roads surrounding Waitsburg never gets old for me, as the landscapes and sky change every hour of every day this time of year. I rarely wash my car (it's the dirty one parked in front of Ten Ton Coffee every morning), as it is almost always re-covered with either mud or dust by the next day-it just gets hosed off every once in a while. Saturday was spectacular with this dramatic sky and lines of freshly mown alfalfa or grass.

As I turned onto Eager Road, where I was treated to this scene, three zopilotes (Spanish for buzzard) launched from the middle the road about 20 feet in front of me. I have always preferred the word "zopilote" to "buzzard" for these important scavengers, as it transports me to the mystical zeitgeist of The Milagro Beanfield War (John Nichols, '74), which I read while noodling around northern New Mexico circa 1978.

Having spent part of my career as a geologist prospecting in the Basin and Range Province (Nevada, Southern Idaho, and points south), I used to see these interesting birds all over the place. They were ubiquitous, and I considered them a good company whenever I was working alone. I suspect I looked like a future meal to them. Although I see them around here from time to time, they seem relatively scarce, so it was a treat to see those three so near. After lift-off, they gained a bit of elevation and then kited around with their unique pattern of flight, which is different from that of other raptors. Wikipedia says that is because they hold their wings in a "V" (dihedral), instead of flat (anhedral) like most raptors. Deep enough...