By Pam Conover
The Times 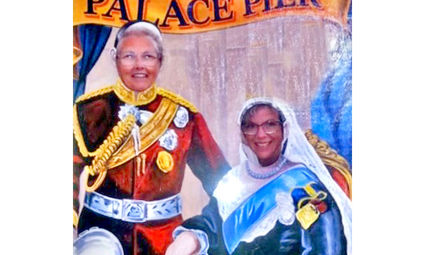 Pat Largent joins the ranks of the nonagenarian, a fancy word for 90, this month. Where the chronological age of 65 is in our culture is considered a senior citizen and 70 plus is considered by some accounts elderly, I am supposing Pat would be considered 'elderly.'

As I recently watched Pat, with her cane, stepping down the sidewalk in Waitsburg I began to recall times with Pat over the years. This amazing woman is someone for whom the word elderly just doesn't seem appropriate. Although widowed at a young age with children to raise, she worked in the kitchen at school and then at local nursing homes in the summer, is a faithful servant of the Lord, , and is known for her delicious bread and cookies.

Pat is one eager to learn, and even adventuresome. We have traveled to Egypt, Israel, England, and across the United States together. Something some may not have known about Pat-she is always willing to try something different; whether its wading through chest-high waters in a pitch-black Hezekiah Tunnel, riding camels in Egypt or the underground in London or visiting the Brighton Pier in England.

Pat will freely admit, she is the reason you have to arrive at the airport three hours early. Inevitably, Pat is the one pulled aside to be searched; in Walla Walla, Seattle, Louisville, London, Tel Aviv. (And this was before 911).

In Louisville before issuing her boarding pass, Pat was asked, "May I search your luggage?"

To which the attendant said, "There is always the Greyhound!"

Pat in no uncertain terms, let me know I needed to be quiet. Pat can speak up for herself.

I'm not certain what category Pat would be placed in the scheme of aging, but certainly not elderly, perhaps seasoned.

So along with other nonagenarians in the community, we celebrate Pat Largent's birthday, a life that has touched many, a life well-lived.