Bert Baxter has more than 1,000 collectable model cars in his extensive collection 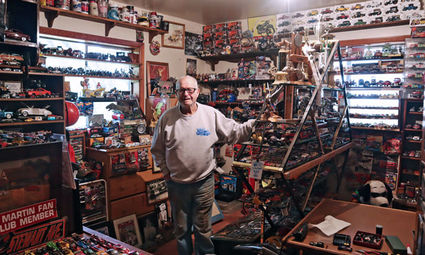 Bert Baxter has spent decades collecting his more than 1,000 model cars and memorabilia.

Baxter's love for all things automotive started at an early age and in 1952 he took up racing mini sprint cars for 15 years. He walked away from the racetrack after witnessing a tragic accident and went from driving to working on cars as he poured his heart and soul into his auto body shop.

It was around this time that he started collecting model cars from shops and yard sales. Each item in Baxter's collection has a unique story.

One of his favorite models is a bright orange 1964 Ford Mustang which came from the Ford dealership he worked at in the 1960's, according to Baxter. The car is powered by a gas and an electric engine and Baxter estimates it is worth nearly $500.

The collection is not limited to just model cars. Baxter also collects rare hood ornaments and emblems. One hood ornament that holds considerable sentimental value for Baxter depicts a graceful female figure in chrome, she stretched out on her stomach, resting her head on her arms.

"That came off of my dad's Hudson. I tried to take it a couple of times, but Dad always made me put it back," Baxter said. "He finally let me have it."

Many of the cars in the collection had the potential to be worth a lot of money. For example, though his collection of Volkswagen buses are each valued at roughly $100, as is, similar models can be worth up to $100,000 each depending on their condition, original packaging and accessories.

"If you can find a bus with the original surfboard, they are worth a lot," Baxter explained. "There are less than five surviving models that are complete. They are super rare."

Baxter has searched high and low at yard sales, estate sales, and antique stores for those elusive automotive gems.

He has found entire collections for sale, and almost always jumps on the chance to pick up a complete collection. If he ends up with any duplicates he enjoys customizing them with stickers and decals, new engines, and other features. Clearly there are more ways to enjoy a model than just as a collectable.

Baxter has been collecting cars and automotive memorabilia since the 1960s and has learned a thing or two about collecting. His best advice to aspiring collectors is not to be afraid to haggle over prices and don't give up if the seller doesn't take your first offer.