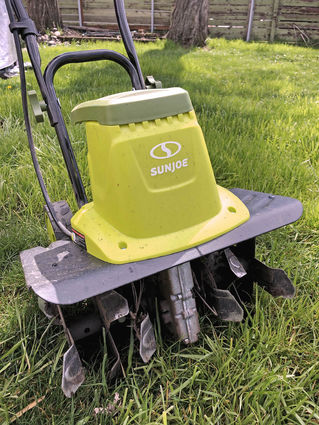 THE DIRT-Gardening is a great way to mitigate that lingering hopelessness associated with these unpredictable, and socially distanced times we face. Here's a little patch of dirt you can control, when so much else is out of hand. And it's good exercise. Plus, food and flowers!

Waitsburg resident, Susan Tarver, reached out to share some of her garden progress. Last year Tarver had great luck with frost tolerant beets and radishes, so she planted more just before the snow. Those little seeds sprouted into seedlings and brought so much joy to my inbox.

For the seeds that aren't as hardy, Tarver has enlisted the help of Doug Biolo at Nancy's Dream Garden Center. In their climate-controlled greenhouses, Tarver has zinnias and nasturtiums growing which is perfect because Tarver's house, much like mine, is not rich in seed starting spots.

As Tarver's radishes rose up from a crack in the soil even after light snow showers, I was empowered to start some seeds of my own.

So far, echinacea and sunflowers started indoors have begun to sprout. Outside, I've started dahlia and poppies to great success, but some others haven't come up yet. We'll give them more time.

As mentioned previously, one of my big garden goals this year is expansion. With the help of an electric tiller, my garden has doubled in size.

From my YouTube research, I found that almost all users spoke highly of the SunJoe 3.5 amp tiller and cultivator. The most common downside is that it is a corded electric machine. Keeping the cord out of the teeth of the tiller was a bigger challenge than anticipated.

Most of the video reviews were also made by heavy-set gentlemen who had no trouble wielding it. At 5' ½", I had a bit of a different experience. There is a safety switch on the right handle that must be engaged in order for the tiller to activate. Holding that down, I pushed the go button and off this bucking bronco went. It was unwieldy to say the least.

Since half my beds needed only a refresh, I started there and it was pretty straight forward. When I transitioned into tilling up the area that had previously been grass, the struggle to keep it in an orderly line became apparent, and then overwhelming. In fact, it seemed to work better going backward and at an angle to penetrate the thick grass roots, rather than straight lines.

Overall, I am shocked and amazed by this cultivator's tenacity. Unbeknownst to me, there were some foreign objects in the grassy areas that this tiller extracted. Lots and lots of rocks were unearthed, but none were thrown up toward me. Because there were so many, I had to stop every few feet and cast them off.

Progress halted completely when the cultivator came upon a half-brick. Before I started tilling I walked the length of the area, so this brick was completely submerged in the dirt. And it was wedged tightly between the blade and the tiller's encasement. It is truly one of life's pleasures when the solution to a problem is to hit it with a hammer. Back to work.

The most unexpected item found tangled in the grass was a two-foot length of rusted chain. It was a nightmare come true to see chains caught up in the teeth of the tiller (that I borrowed, mind you), but the chain detangled just as easily.

After the initial pass, going back over the new garden beds perpendicularly was much easier. And now I'm anxious to plant more.

Now that the beds are ready, I've made adjustments to the original plan. Items previously written in pencil that have come to fruition have been updated to pen, while old ideas were erased and new ones penciled in for future plantings. According to the updated garden plan, buttercrunch lettuce should go in next.

As you can see, there's still a heap of branches currently resting in the future home of our pumpkin patch that need shredding. Does anyone have a woodchipper I can borrow? Share your garden glory with brianna@waitsburgtimes.com.